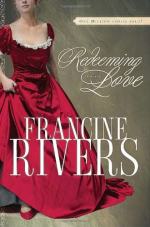 Francine Rivers
This Study Guide consists of approximately 56 pages of chapter summaries, quotes, character analysis, themes, and more - everything you need to sharpen your knowledge of Redeeming Love.

This detailed literature summary also contains Topics for Discussion and a Free Quiz on Redeeming Love by Francine Rivers.

Redeeming Love is based on the Biblical chapter of Hosea, in which God tells his prophet, Hosea, to marry the prostitute, Gomer, to illustrate God's faithfulness to Israel despite Israel's sin. The novel is set in the nineteenth century, and told mostly from the perspective of the prostitute, Angel. Her birth name is Sarah, but she hasn't told anyone her name since being sold into prostitution at the age of eight. When God tells Michael Hosea to marry her, he obeys, but this command proves to be more of a challenge to him than he bargained for. Angel continually runs from him, first in search of freedom, and then to escape the love she is starting to feel for Michael. However, Michael's steadfast love and God's faithfulness and protection eventually prove to Angel that she is worth loving, and she is able to give in to the love of her husband and of her God.

Even before being sold into prostitution, Sarah has known only rejection from men, as she overhears her father say that she should never have been born. From the relationship between her parents, Sarah learns what happens to women who love men, as she watches her mother grieve and eventually die feeling only rejection from the man she loves. Now eighteen and going by the name Angel, she believes that she knows everything about men and how to give them what they want. When Michael Hosea enters her room and tells her he wants to marry her, she is thrown off guard, but remains aloof toward him. It is not until she is nearly beaten to death that she agrees to marry Michael and leave with him as he nurses her back to health. Michael continues to surprise her as he claims to love her as his wife, and refuses to have sex with her. He is different from any other man Angel has ever known and this makes her confused and unwilling to trust him. She runs away at her first opportunity, but Michael is quick to find her and convince her to come home.

The next time Angel runs away, she gets a ride with Michael's brother-in-law, Paul, who hates her because of her past. When he demands payment for the ride, she pays him the only way she knows how, by allowing him to have sex with her. Their relationship is poisoned by this event until the very end of the novel. Back in the city, Angel is forced back into prostitution, but finds it more difficult now to remain distant. When an angry Michael shows up at the brothel and takes her home again, it is the relief on her face when she sees him that gives him hope and allows him to forgive her. For the first time, Angel is truly honest with Michael about her past, and their relationship begins to grow, based on honesty and affection.

Angel does not run away from Michael again for a long time, but when she does, it is because she is terrified to find herself falling in love with him. When she realizes that she does love him, she remembers what love did to her mother, and forces herself to leave. This time, however, she stays away from her old life, and is able to make an honest living for the first time in her life. When Michael comes to find her yet again, she confesses that she ran away because she was scared to love him, and he assures her that she can trust him. She agrees to go home with him again.

The final time Angel runs away, it is not because she doesn't love Michael, or even because she is scared of her love. This time, she proves that she loves him enough to make sacrifices for him. She believes that what Michael wants most in the world is children, but she is unable to bear children herself. She believes that by leaving, she will give Michael freedom to find someone else to marry, and he will therefore be happier without her. When she leaves this time, she intends to stay away forever. This time is also different because Michael does not go after her, believing that she needs to come back on her own. Angel is gone for three years, and has started a successful mission to help other young prostitutes, when Paul finally comes to find her. He soon realizes that he has been wrong about Angel all this time, and convinces her that Michael is still in love with her.

Angel returns home to Michael for a final time, offering her love and her life. He knows that she is back to stay this time, and is overjoyed when she gives him the only gift she has left to give: her real name, Sarah. God shows his faithfulness to Michael and Sarah throughout their lives, eventually blessing them with children and success in all their endeavors, and they are happily married for the rest of their lives.

More summaries and resources for teaching or studying Redeeming Love.