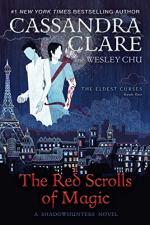 Cassandra Clare
This Study Guide consists of approximately 60 pages of chapter summaries, quotes, character analysis, themes, and more - everything you need to sharpen your knowledge of Red Scrolls of Magic.

This detailed literature summary also contains Quotes and a Free Quiz on Red Scrolls of Magic by Cassandra Clare.

The following version of the book was used to create this study guide: Clare, Cassandra, The Red Scrolls of Magic. Simon and Schuster, New York, NY, 2019. Kindle AZW file.

Alec Lightwood is a Shadowhunter, a group of angel-blessed people who have trained their entire lives to fight demons and Downworlders to protect the world – and its mortal inhabitants – from those dangers. Shadowhunters are a tight-knit group, and the majority are close minded when it comes to any sexual orientation other than heterosexual. Alec has denied his sexuality for his entire life. At 18-years-old, he decided he could no longer change this fundamental part of himself. He announced his love for another man.

Magnus Bane is a warlock. By definition, he is a Downworlder. Shadowhunters have a low opinion of most of his kind. He is immortal, having experienced almost everything life has to offer. He finds himself returning Alec's love. While most Shadowhunters disapprove of the relationship because it is same sex and Magnus is a warlock, Alec finds himself becoming more invested in the relationship. Though Magnus is being shunned by many Downworlders and is not invited to a big party because of the relationship, he finds himself becoming equally invested. However, that does not mean everything is smooth. Magnus is keeping secrets, including the name of the Greater Demon who is his father.

Magnus and Alec are locked in a romantic embrace when they are interrupted by Tessa, a shape-changer who has been friends with Magnus more than a century. Tessa warns that a cult known as the Crimson Hand has gone from being a joke to being a problem, and the governing body of the warlocks is demanding that they be shut down. Rumors are that Magnus is the founder and the leader. Magnus's first fear is that Alec will be so horrified that he leaves. The opposite is true, and Alec sets out to help Magnus clear his name. The first problem is that Magnus actually did establish the cult, though he did so as a joke.

Another warlock, Shinyun Jung, approaches Magnus claiming to be seeking information. Shinyun hints that she was hurt by the cult and wants to shut it down. Magnus, feeling that he is responsible for what happened to her, trusts her and wants to help. Shinyun claims to have a lead. However, he drugs Magnus to limit his powers and imprisons him. Only after she begins the ceremony to summon Asmodeus does Shinyun discover the horrible truth. Magnus created the cult during a time of anger and frivolous disregard for others, and he created it in the name of his own father, Asmodeus. Shinyun believes that killing Magnus will summon Asmodeus and land her a position at the demon's right, but she discovers that Asmodeus would rather kill her and have Magnus in that position.

Neither happens because of Magnus's hatred for his father and his determination to do right. Instead, Magnus, Alec, and some other Shadowhunters put an end to Shinyun's plan and the cult's activities. In a moment of misguided compassion, Alec releases Shinyun, believing that she is also a victim of the cult and does not deserve the death sentence he is certain the Shadowhunters will impose on her. Magnus and Alec resume their relationship, though they cut their travels short and return home to New York. Shinyun, meanwhile, returns to her home in Korea where she is holding a warlock prisoner. Magnus's friend, Ragnor Fell, is Shinyun's captive. Shinyun vows to exact her revenge on Magnus and other sons of demons.

More summaries and resources for teaching or studying Red Scrolls of Magic.