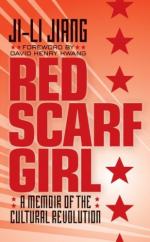 Ji-li Jiang
This Study Guide consists of approximately 23 pages of chapter summaries, quotes, character analysis, themes, and more - everything you need to sharpen your knowledge of Red Scarf Girl.

Red Scarf Girl: A Memoir of the Cultural Revolution Summary & Study Guide includes comprehensive information and analysis to help you understand the book. This study guide contains the following sections:

This detailed literature summary also contains Topics for Discussion and a Free Quiz on Red Scarf Girl: A Memoir of the Cultural Revolution by Ji-li Jiang.

Red Scarf Girl, by Ji-li Jiang is the fascinating story of Ji-li and her family's experiences during the Cultural Revolution in China. The Cultural Revolution began in 1966 when Ji-li is twelve. Up until that time she is very happy with life in China. She is a good student who is admired by her classmates. Then one day she is selected to audition for the dance team at the Central Liberation Army Arts Academy. She is elated and honored at the opportunity and excitedly tells her family that evening at dinner. Her parents tell her that she cannot audition. There would be a political background investigations check that her family could not pass.

Ji-li's world is shattered. She never knew that there were political problems in her family. She always thought that she had a bright future and could be anything that she wanted to be. Now she knows that it is not true. Her parents tell her and her brother and sister that what happened occurred many years ago and does not concern them.

Ji-li and her friends and brother and sister come home with stories about events taking place as a result of the Cultural Revolution. Their grandmother and parents are careful in the words they use in cautioning them about taking part in the events. Ji-li has problems doing some of the things that are required of the students, such as criticizing teachers. When she is nominated by her class for election to the Red Successors, one of the students accuses her long deceased grandfather of being a landlord and her father of being a Rightist.

Ji-li's father has problems with the work unit at the theater he works at. He and his wife spend a lot of time talking in the bathroom. When he is accused of listening to foreign radio broadcasts, he is detained and away from home for several months. He is subject to class struggle meetings with the work unit trying to force him to confess. Eventually, Ji-li is subject to study session at school where they try to pressure her into testifying against her father. Just as things look their worst, the personnel at the theater change and Ji-li's father and others are released. Even though the family is together again, their lives have been devastated. Ji-li's father is cleared of all charges in 1980 and the family soon moves to the United States.

Red Scarf Girl is the story of what Ji-li and her family lived through. It tells of the fears, the problems, and the wrong doings of the time. The book is quick and easy to read and well worth the reader's time.

More summaries and resources for teaching or studying Red Scarf Girl: A Memoir of the Cultural Revolution.