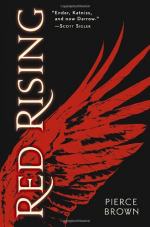 Pierce Brown
This Study Guide consists of approximately 47 pages of chapter summaries, quotes, character analysis, themes, and more - everything you need to sharpen your knowledge of Red Rising.

Darrow is a Helldiver in the bowels of Mars. Darrow likes his job and is content in his life. Darrow is married, lives with his mother, sister, and his brother’s family. The only things missing from Darrow’s life are more food and supplies for his family. When Darrow thinks he has won an award that will provide these needs, he discovers that he has not.

Darrow’s father was a rebel who was put to death for dancing. Darrow has always admired his father, and missed him deeply, but he has never wanted to follow his footsteps. Eo, however, encourages Darrow to do so. When Eo is executed for singing a song, Darrow is willing to give his life to bury her body. However, he is rescued and given the opportunity to fight for the dream Eo had.

More summaries and resources for teaching or studying Red Rising.