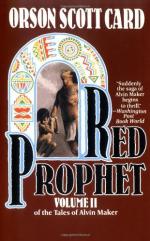 Orson Scott Card
This Study Guide consists of approximately 54 pages of chapter summaries, quotes, character analysis, themes, and more - everything you need to sharpen your knowledge of Red Prophet.

This detailed literature summary also contains Topics for Discussion and a Free Quiz on Red Prophet by Orson Scott Card.

Red Prophet by Orson Scott Card is the second in the Alvin Maker series and is a dramatic look at what early America could have been. This work of fiction involves characters pulled from reality that include Ta-Kumsaw (Tecumseh) and his brother Tenskwa-Tawa (Tenskwatawa); taken from the time of Napoleon Bonaparte shortly after his victory against the Spanish Army. Alvin Junior is the seventh son of a seventh son, and as such has been born with unusual gifts. Alvin is a Maker. In this volume of the series, Alvin's gifts are becoming noticeable to a degree that his father, Alvin Miller, believes it is in his best interest to indenture him to learn a trade. However, before he can reach his destination, he and his brother are taken hostage by a renegade group of Reds who were hired to incite upheaval between the white and red populations by self proclaimed Governor William Harrison.

Harrison see the Red population as a race not much above that of common house pets and treats them as such. He keeps them well liquored, insisting that the best Red is a drunken Red. Carthage City, where Harrison has his garrison of soldiers is a supply center for whiskey and Harrison lives well from the proceeds. When Armor-Of-God Weaver who runs the nearest town called Vigor Church advocates peaceful relations with the Reds, he sets up the conditions that lead to Alvin's kidnapping. Lolla-Wossiky is destined to become Tenskwa-Tawa, The Prophet. When Governor Harrison shot and killed his father in front of him, he lost touch with himself and the land until Alvin heals him. He has a vision, showing him that he will gather the Reds together and he does so, forming Prophetstown across the river from Vigor Church, and drawing Reds away from liquor and back to the land and families they love.

The kidnapping of Alvin and his brother Measure sets in motion the very war that General Harrison hoped for, but under circumstances he could not have predicted. Tenskwa-Tawa sees the kidnapping and sends his brother, Ta-Kumsaw, to rescue the brothers, knowing that their lives are intertwined. When Ta-Kumsaw brings them to Tenskwa-Tawa, Alvin learns that his fate is to keep Ta-Kumsaw alive. His special gifts, which allow him to heal and to hear the land the way a Red man does, are necessary when Ta-Kumsaw and his brother part company. This happens shortly after the massacre at Tippy-Canoe that is incited by Harrison as a direct result of the kidnapping he orchestrated.

The Reds never fight back. Standing together as a group with their families, they submit to the future the Prophet has assured them is necessary. When Measure suddenly shows up, alive and spreading the truth about Harrison, the killing ends. Tenskwa-Tawa puts a curse on those involved, including a special curse for Harrison. With characters that are unusual, including Taleswapper (who travels collecting stories of importance); Hooch Palmer who is a "spark" and supplies the Reds and Harrison with whiskey; Becca - Ta-Kumsaw's wife who lives her life at a loom that weaves the lives of many into her cloth that is hundreds of years long; Gilbert, the Marquis de Lafayette with his amulet of protection against the influences of Napoleon and more, their story is overlapping and filled with intermingled plot lines. It is a version of American history that never was but could have been. Red Prophet is an unusual tale told about dangerous and complicated times.

More summaries and resources for teaching or studying Red Prophet.