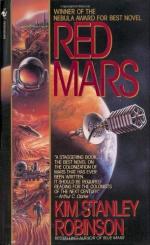 Kim Stanley Robinson
This Study Guide consists of approximately 50 pages of chapter summaries, quotes, character analysis, themes, and more - everything you need to sharpen your knowledge of Red Mars.

This detailed literature summary also contains Topics for Discussion and a Free Quiz on Red Mars by Kim Stanley Robinson.

'Red Mars' by Kim Stanley Robinson is an epic novel about the colonization of Mars. The story is a journey of mankind on its search for immortality and a new world in which to begin a new life.

In the novel, the first of a series of three, one hundred participants are chosen to go to Mars after a rigorous selection process, and include geniuses from Russia and the United States, as well as from other countries. Following a long and somewhat troubled journey through space for nine months, the crew lands on Mars and begins work on Underhill, the first colonization base. Nuclear generators are built for power, medical stations are built, biologically engineered farms produce food, and the bio-engineers create life forms that can life on the surface. A debate, rising on the Ares and continuing both on Mars and on the Earth, rages in terms of whether Earthlings have the right to terraform and mine Mars for their own benefits.

The Reds, led by Ann Clayborne, believe Mars should not be abused and used for profit or Earth expansion, whereas the Green's, led by Sax Russell, believe that terraforming is necessary in order for life on Mars to continue. Over time this and other political arguments tear the settlement into factions, and as more immigrants arrive from Earth, the situation only worsens. When the medical team develops a near immortality drug, more problems ensue on Earth as a result of an uprising of the poor, causing even more immigration to Mars. One of the medical team soon disappears with a group of followers, and begins harvesting eggs to produce children.

Mining begins in earnest on the planet, and more workers are brought in from Earth. What was once a scientific juncture is slowly turned into a struggle for power by governments and international companies, all of whom aim to carve a piece of Mars for themselves and their own monetary gain. When the situation reaches a critical juncture where the new towns are overcrowded and understaffed, riots begin between UNOMA police and the population of Mars. Soon, these riots turn to a revolution as many of the new city domes are sabotaged. Water supplies are damaged, causing massive flooding and death, and the entire moon of Phobos is destroyed.