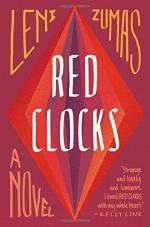 Leni Zumas
This Study Guide consists of approximately 66 pages of chapter summaries, quotes, character analysis, themes, and more - everything you need to sharpen your knowledge of Red Clocks.

Red Clocks, by Leni Zumas, is told from the perspectives of five different women. Four of the narrators are living at the same time in the same coastal Oregon town, while the fourth is a nineenth century arctic explorer, and the subject of a biography one of the narrators -- Ro -- is writing. The novel jumps back and forth between these five different perspectives, and each section from a contemporary narrator's point of view is sandwiched by excerpts from Ro's biography on the polar explorer. The four contemporary characters all have names, but are referred to by specific labels in their own sections. These labels are also the titles of their respective sections. Ro is referred to as the biographer in her sections, which are all titled "The Biographer." The other narrators only refer to her by her name when discussing her in their own sections. The other three contemporary characters and their labels are as follows: Susan, who is the wife, Mattie, known as the daughter, and Gin, who is called the mender. The arctic explorer who Ro is writing about is always called by her name, which is Eivor Minervudottir.

The novel opens with a page of fragments detailing the birth of polar explorer Eivor Minervudottir in 1941, on the Faroe Islands. It then moves into a section from the perspective of the biographer, Ro. She is taking fertility medicine in order to conceive a child through intrauterine insemination, but she is a single 42-year-old woman and worries her chances of conception are slim. The novel shifts to the mender, Gin, who reflects briefly on her falling out with Lola. The novel jumps to the daughter, Mattie, who has sex with a boy from her high school class named Ephraim. The next section describes the wife, Susan, imagining driving her car off a cliff, as well as seeing a burnt animal in the road. The narrative returns to the biographer, who describes how the United States banned abortion and in vitro fertilization two years ago, and made it so that only married couples can adopt children. The biographer works at the high school, and learns that the principal's wife is in the hospital. She visits the mender for fertility medicine, and Gin suggests that Ro may have polycystic ovary syndrome. In the daughter's section, Mattie worries that her period is seven weeks late. The wife plans to ask her husband, Didier, to go to marriage counseling with her. She has Ro over for dinner, but it is clear the two women do not get along very well. Ro is jealous of Susan's children, and Susan does not want Ro to conceive, or to publish her book.

The mender learns that people in town are blaming her for the seaweed that is clogging the coast. The daughter sees Ephraim embracing another girl in the halls at school. She wishes that her friend Yasmine were here to help her. The wife struggles to decide if she even wants to go to counseling with Didier, but decides she must so that her children do not grow up in a broken home. The biographer learns that Principal Fivey's wife, Dolores, fell down the stairs, resulting in a swollen brain and a coma. The mender, is yelled at by a stranger in town who says she tried to kill Mrs. Fivey. Gin refers to Mrs. Fivey as Lola. Gin had treated Lola for a burn, and the two had had a brief affair. When Gin refused to live with Lola for a time, Lola accused her of being crazy. The daughter takes a pregnancy test, which turns out positive. She wonders what her birth mother is like, and why she was given up for adoption. Susan asks Didier to go to marriage counseling, and he refuses. Eivor marries a 52-year-old widower when she is 19 years old.

The mender knows that Lola's husband was beating her, which was why she had so many injuries. The wife resolves to have an affair with Bryan Zikale, a teacher at the high school. Rumors are circulating about the mender's involvement in the seaweed in the water, as well as Mrs. Fivey's injury. The biographer learns that she does have polycystic ovary syndrome, and will never conceive. The daughter goes to the mender's to request an abortion. Gin tells her she will have an abortion remedy for her in a few days. The perspective moves to the mender, who reveals that she does have abortion remedies handy, but that she did not want to give one to Mattie right away, because Mattie is her daughter. That night, police officers come to her cabin and arrest her for medical malpractice. The wife wonders if she should have dropped out of law school, or if she should divorce Didier soon. Eivor moves to Abderdeen, and ends up with a job as a maid in a shipyard director's home. She joins in on the family's tutor's lessons.

Gin is being accused of giving Lola medicine for her burn which caused her to fall down the stairs and nearly die, even though the salve the mender supplies was not supposed to be consumed orally. She is also being accused of conspiracy to commit murder, because Lola has said she gave her medicine for an abortion. This is not true, according to the mender. If convicted, she faces seven years in prison. Susan realizes that she wants to leave her marriage, but is too afraid to leave first. The daughter tells Ro that she is pregnant. She tells Ro she planned to terminate the pregnancy, and is confused by Ro's anger. Ro realizes she could ask Mattie to give her the baby. Eivor pretends to be a man and joins the crew of a steamship bound for the Arctic Ocean. The biographer goes to Mattie's house and learns Mattie is in Vancouver. She hopes that Mattie is stopped at the Canadian border so she cannot get an abortion. When the daughter reaches the border, she is turned back by officers who suspect that she is pregnant. She thinks about her friend Yasmine, who gave herself a homemade abortion. Susan hopes to begin an affair with Bryan, but gives up when he does not seem interested.

Susan goes to watch the start of Gin's trial, and studies the lawyers. In court, the mender knows Lola is trying to save her own life by lying, and that it will be Lola's word against her own. Mattie is at the trial as well, and becomes distressed by the mentions of abortion. The biographer watches the trial as well, and is enraged at its similarities to a medieval witch hunt. She approaches Mattie to ask for the baby, but does not ask. The wife resolves to tell Didier she is leaving. She remembers a piece from her conversation with Bryan: he had told her that he had a cousin whose husband beats her. She realizes that Bryan is Mrs. Fivey's cousin, and he must be referring to Mr. and Mrs. Fivey. She calls Gin's lawyer Edward, who then has Bryan testify against Mr. Fivey.

Eivor returns from her voyage, and begins writing an article on arctic sea ice. Her article is rejected because the Royal Society does not believe a woman could have written it. The biographer agrees to go with Mattie to the termination house in Portland for an abortion. Eivor has her old tutor publish her article under his name. In court, Lola recants her previous testimony. She says that she fell because her husband put colarozam in her scar medicine and made her drink it with alcohol. The mender is declared not guilty.

Ro brings Mattie to Portland for her abortion. She notices the political posters in the building about rallies and marches for women's rights, and is grateful for their action. Mattie's procedure is successful. Eivor plans to join another ship bound for the arctic. The wife tells her husband that she wants a separation, and begins tasting the dirt beneath her. The mender returns home from the courthouse, and reflects that Mattie will always be welcome in her cabin. The daughter writes to Yasmine asking her if they can be friends when Yasmine leaves the correctional facility. Eivor's body is found trapped under ice in the arctic, and is not recovered by the crew. Ro thinks of a possible ending for the biography, and about the impact that Eivor's ideas had on the world. The biographer then makes a list of the things that she may or may not want out of life, and all of the possibilities that are open to her.

More summaries and resources for teaching or studying Red Clocks.