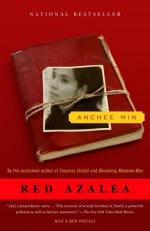 Anchee Min
This Study Guide consists of approximately 31 pages of chapter summaries, quotes, character analysis, themes, and more - everything you need to sharpen your knowledge of Red Azalea.

The author, Anchee Min, says that she began learning the teachings of Mao from a very early age as well as the operas of Madam Mao. She became a devout member of the Little Red Guard, a school version of the Communist Party. Her parents work long hours as teachers and Min is responsible for her three younger siblings from the time she was five. She says it is the same with all the children and that the older children tie the younger siblings onto their backs with a strip of cloth so that they are free to play.

As Min grows, she becomes very active in the Little Red Guard and is called on by Party officials to speak out for the Party. Her ability to write well and to recall what she has written makes her ideal for writing and presenting speeches. When she is told that a teacher named Autumn Leaves is an American spy, Min is skeptical. She's convinced by a Party secretary named Chain who uses the fact that Autumn Leaves has allowed Min to borrow American fairy tales as proof of guilt. Min is then told that Autumn Leaves had written in a diary that Min is "educable," which Min is told means that Autumn Leaves has targeted Min as a potential revolutionary. Min, caught up in the flattery of being singled out by the Party as a good young mind who will make a good adult Party member, the young Min writes a speech formally accusing Autumn Leaves though she wavers when forced to confront her teacher in front of a crowd.

At seventeen, Min is sent to Red Fire Farm - a Communist Party effort at mass production of food in unforgiving conditions. In truth, the farms fail to provide for the workers. Here, Min learns about the depths to which power-hungry leaders will go in order to advance in the Party as a woman named Lu remains bitter at her position as second-in-command. Min then develops hero-worship for the company commander, Yan, and then discovers that Yan, like herself, is young, impressionable and holds to dreams of love. The two grow closer and become secret lovers, though their love manifests in changes of attitude.

Then Min is chosen to try out for a film called Red Azalea, a project of Jiang Ching who is wife of Chairman Mao. Min is a strong contender for the part but a girl called Cheering Spear is chosen because of her fawning and flattery which is cited as dedication to the Party. When Cheering Spear falls out of favor, Min replaces her as the star of the project, though she meanwhile falls in love with a man she knows only as the Supervisor who is in charge of the project. With Mao's death, the Supervisor becomes a wanted man and Min is again reduced to the position of clerk before going to America in 1984.

More summaries and resources for teaching or studying Red Azalea.