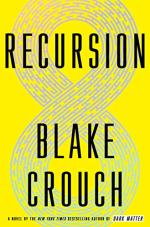 Blake Crouch
This Study Guide consists of approximately 41 pages of chapter summaries, quotes, character analysis, themes, and more - everything you need to sharpen your knowledge of Recursion.

This detailed literature summary also contains Quotes and a Free Quiz on Recursion: A Novel by Blake Crouch.

The following version of this book was used to create the guide: Crouch, Blake. Recursion. Penguin Random House LLC, 2019.

In Recursion, NYPD detective Barry Sutton struggles to live a normal life even 11 years after the death of his 16-year-old daughter Meghan and his resulting divorce from his wife Julia. When Barry fails to save a woman suffering from recently occurring False Memory Syndrome, Barry endeavors to understand and solve the bizarre psychological phenomenon. His work, however, leads him into the hands of maniacal scientist, Marcus Slade. At Slade's Hotel Memory, Barry is transported in time back to the night of Meghan's tragic death.

Left to relive his life after successfully saving his daughter from a hit-and-run accident, Barry attempts to reconcile his competing lives. Eventually, however, FMS afflicts Julia, Meghan, and Barry. They, as well as all of New York, are suddenly plagued with false memories. When his daughter dies again, Barry tries again to solve the FMS mystery.

Meanwhile, young scientist Helena Smith, works tirelessly to invent a memory chair capable of mapping and conveying past experiences for Alzheimer's patients. When her funding at Stanford runs out, she accepts an offer to work with famous scientist and philosopher, Marcus Slade. He takes her to his isolated oil rig, Fawkes Station off the Californian coast. Together they work on further developing Helena's memory chair. When Slade suggests creating a deprivation tank in which they will kill test subjects and transport them back in time. Helena then realizes the true extent of Slade's wicked endeavors and makes a plan to escape the rig and Slade altogether. She transports herself back in time, flees the United States, and abandons her scientific work in an effort to keep her technological discoveries from Slade.

As time passes, however, Helena realizes she cannot forever cease her work. Slade also still possess knowledge and control of her memory chair. Eventually her timeline merges with Barry's and the two begin a venture to stop Slade and save the world.

Having lived many life iterations already, several even with Barry as her longtime romantic and scientific partner, Helena teaches Barry about the destructive power of the chair and Marcus Slade. Before they can solve the mystery, however, Helena ends up in the hands of a DARPA team. The team, led by another of Slade's former assistants, Rajesh, also has control of the chair. They, however, use it to reverse deaths and save lives, rather than destroying them. Eventually, however, word of the chair leaks to a litany of foreign governments and global warfare ensues.

Barry and Helena realize the only way to save the world from self-destruction, is to relive life over and over until they fine tune the chairs technology and eliminate false memories altogether. Time and again, Barry and Helena repeat their experiences without success. The more times they fail, the more frail Helena becomes, the more Barry realizes he loves and is loyal to her. In one of Barry's life iterations he realizes that only Slade knows how to stop the chair's destructive effects. In Barry's final life, he wakes up in an Antarctic station by himself. He finds a video recording of Helena, speaking to him from an alternate timeline, and informing him they have given up their mission and she has already died.

So overcome by despair, Barry decides to kill himself. Just after he attempts suicide, however, he is flooded with former memories and realizes the only way to save Helena and the world is to return to the moment Slade initially endangered Helena's life. He transports himself years into the past and stops Slade from killing Helena. As a result, dead memories are eliminated and the world is returned to its original timeline. Barry finds Helena and restarts their relationship together.

More summaries and resources for teaching or studying Recursion: A Novel.