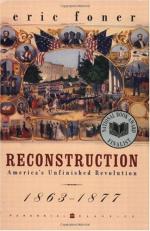 "Reconstruction: America's Unfinished Revolution 1863-1877" is a historical account of the years following the Civil War, known as the Reconstruction Era, and how the political, economic, and social environments were changed in both the North and South during this period.

Eric Foner defines Reconstruction as beginning January 1, 1863 or the day that President Abraham signed the Emancipation Proclamation, which indicated the position of the federal government under the Republican party that it had the national authority to emancipate the slaves in the South. This ushered in a series of civil rights acts and constitutional conventions that sought to extend and protect the rights of blacks in the South in the years after the war.

Reconstruction efforts were first undertaken by President Lincoln and then his successor, Andrew Johnson, in the years from 1865 to 1867, however President Johnson fell into conflict with the radical wing of the Republican party who felt he was too lenient on former rebels and that he did not support the radical agenda of providing blacks with equal civil rights, including the right to vote. His successor, the former general U.S. Grant, had little political experience and left Reconstruction largely to Congress in a period Foner calls Congressional or Radical Reconstruction, which lasted until 1877, when Republican President Rutherford B. Hayes finally ordered the last federal troops in the South to stand down.

During Radical Reconstruction, southern blacks saw their rights expanded to include the right to own property, negotiate their own labor and for black males to vote. As the nation sunk into a depression in the 1870s, however, the Radical Republicans who fought to protect these rights for blacks lost influence in state and national government. "Redeemer" governments of Democrats took over the southern states and instituted laws that protected groups like the Ku Klux Klan and effectively removed economic and political influence from southern blacks.

Reconstruction transformed the North as well. The expansion of industry, aided by the tremendous growth of the railroads, created a wealthy class of industrialists who found sympathy from the Republican administration and assistance to regulate and suppress labor movements among the growing working class.

The nation was also transformed politically. Federal authority over the states expanded under Republican authority during the war and Reconstruction years, but was then sharply curtailed in 1877 in a series of decisions by the Supreme Court that limited authority over the states. A precedent had been set, however. Foner concludes that Reconstruction failed its two main goals of achieving equal rights for blacks and expanding Republican influence in the South. The issue of civil rights would not be taken up by the nation in earnest for another hundred years, he writes, and in many ways the issue has still not been fully addressed.