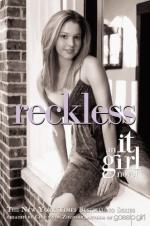 Cecily Von Ziegesar
This Study Guide consists of approximately 43 pages of chapter summaries, quotes, character analysis, themes, and more - everything you need to sharpen your knowledge of Reckless.

The north-east corner of the United States, home to old families and old money, is the novel's geographical and social setting.

This is the small New England town located near the Waverly Academy.

The action of the narrative is set almost entirely within the boundaries of this upper class boarding school. The only time the action leaves the campus is in Part 4, when several characters venture out to a restaurant (see "Le Petit Coq" below).

The owl is the school mascot for Waverly. The students there refer to themselves as owls.

This is the dormitory where the girl students of Waverly all live, and the building to which they are all confined following the discovery of Tinsley's party on the roof.

Generally unsupervised by teachers, the roof of Dumbarton Hall has been the setting for several...

More summaries and resources for teaching or studying Reckless.