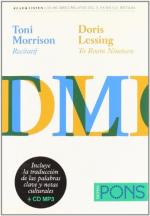 Toni Morrison
This Study Guide consists of approximately 53 pages of chapter summaries, quotes, character analysis, themes, and more - everything you need to sharpen your knowledge of Recitatif.

"Recitatif" is the only published short story by luminary African-American novelist Toni Morrison. It appeared in a 1983 anthology of writing by African-American women entitled Confirmation, edited by Amiri and Amina Baraka. "Recitatif" tells the story of the conflicted friendship between two girls—one black and one white—from the time they meet and bond at age eight while staying at an orphanage through their re-acquaintance as mothers on different sides of economic, political, and racial divides in a recently gentrified town in upstate New York.

While Morrison typically writes about black communities from an inside perspective, in this story she takes a different approach. The story explores how the relationship between the two main characters is shaped by their racial difference. Morrison does not, however, disclose which character is white and which is black. Rather than delving into the distinctive culture of African Americans, she illustrates how the divide between the races in American culture at large is dependent on blacks and whites defining themselves in opposition to one another. Her use of description and characterization in the story underscores the readers' complicity in this process. Morrison has considered similar issues in her book of criticism, Playing in the Dark: Whiteness and the Literary Imagination, which explores how language enforces stereotypes in the work of classic American authors such as Melville, Poe, and Hemingway. "Recitatif" may therefore be understood as part of Morrison's ongoing response to the mostly white and male classic literary tradition of the United States.

More summaries and resources for teaching or studying Recitatif.

Recitatif from Gale. ©2005-2006 Thomson Gale, a part of the Thomson Corporation. All rights reserved.