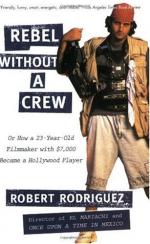 Rebel Without a Crew: Or How a 23-Year-Old Filmmaker with $7,000 Became a Hollywood Player Summary & Study Guide

Robert Rodríguez
This Study Guide consists of approximately 41 pages of chapter summaries, quotes, character analysis, themes, and more - everything you need to sharpen your knowledge of Rebel Without a Crew.

Rebel Without a Crew: Or How a 23-Year-Old Filmmaker with $7,000 Became a Hollywood Player Summary & Study Guide Description

Rebel Without a Crew: Or How a 23-Year-Old Filmmaker with $7,000 Became a Hollywood Player Summary & Study Guide includes comprehensive information and analysis to help you understand the book. This study guide contains the following sections:

This detailed literature summary also contains Topics for Discussion and a Free Quiz on Rebel Without a Crew: Or How a 23-Year-Old Filmmaker with $7,000 Became a Hollywood Player by Robert Rodríguez.

Rebel Without a Crew tells the story of how Robert Rodriguez wrote and directed the movie El Mariachi, which is now considered a Hollywood classic, when he was only 23 years old and had a limited budget of $7,000. This is an excerpt from the filmmaker's diary, so the story is told in the first person and gives a detailed and almost daily account of what Rodriguez has to go through to achieve his dream of making a feature film.

Rodriguez is from a large, Texas-based family with Latino origins. His fascination with movies and filmmaking starts when he is a just child. He is a patient child who uses his siblings as actors in his home movies, and as years go by he perfects his editing techniques, thanks to the family's two VCRs. All these years of practicing his craft using only elementary equipment pay off because he becomes better at directing and editing. This is why, with no formal directing training, Rodriguez starts winning awards for one of his home movies, "Bedhead," starring his younger sibling.

In school, Rodriguez meets Carlos Gallardo, an aspiring Mexican filmmaker, and their friendship continues even when Carlos returns home to Ciudad Acusa and Rodriguez enters University of Texas at Austin. After visiting a movie set in Ciudad Acusa in the spring of 1991, Rodriguez decides to write and direct his own feature movie. It will be called El Mariachi, and because Rodriguez expects it to not be very good, it will serve as a practice movie. He also plans to sell it to the straight-to-video Spanish film market.

The problem is that Rodriguez has no money for this film, so he decides to raise part of it by being a rat lab at Pharmaco, a pharmaceutical research institute, for thirty days. Once the script is written and money is raised, Rodriguez goes to Ciudad Acusa in the summer of 1991, where he and Gallardo hire actors on the spot, improvise several scenes, use makeshift costumes, and after a few weeks, wrap up the production of El Mariachi. Rodriguez returns home to start the long process of editing, but first he creates a very effective trailer for his movie.

When El Mariachi is ready to be sold, Rodriguez and Gallardo go to Los Angeles armed with a video that contains the trailer for El Mariachi and Rodriguez's home movie "Bedhead," which by now has won several awards. Although some of the Spanish language video companies seem interested in the movie, none follows through; consequently, Rodriguez turns to ICM, one of the biggest talent agencies in the country. Although the movie is in Spanish, its trailer gets the attention Rodriguez was hoping for and he gets signed by ICM. After this, an unlikely Hollywood version of a fairy tale begins for Rodriguez. He signs a contract with Columbia Pictures and although Rodriguez originally did not want El Mariachi to be released—it was only supposed to be his "practice movie"—he relents, and the movie is an instant hit at film festivals. El Mariachi even wins the prestigious Sundance Film Festival Audience Award. The movie receives the same enthusiasm once it is released nationally, and it even receives international acclaim a couple of years later. Because of his talent, his young age, but especially his story of selling his body to science to finance his movie, Rodriguez becomes a media darling. What he seems to be happiest about, however, is that his story has inspired aspiring filmmakers to believe in themselves.

More summaries and resources for teaching or studying Rebel Without a Crew: Or How a 23-Year-Old Filmmaker with $7,000 Became a Hollywood Player.

Rebel Without a Crew: Or How a 23-Year-Old Filmmaker with $7,000 Became a Hollywood Player from BookRags. (c)2022 BookRags, Inc. All rights reserved.