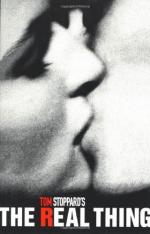 There are several possible ways to interpret the conclusion of The Real Thing. Do you believe that Annie and Henry will be happy together? Or is their relationship, like their first marriages, doomed to failure?

Discuss the relationship between the main play and one or two of the other plays Stoppard refers to in The Real Thing. What do these extracts suggest to the audience about Henry and Annie?

What was your response to the character of Henry? Did you feel alienated by him, or did you empathize with him? Focus your response by discussing two scenes in which he appears and using his behavior in them to illustrate your argument...