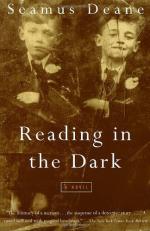 Seamus Deane
This Study Guide consists of approximately 40 pages of chapter summaries, quotes, character analysis, themes, and more - everything you need to sharpen your knowledge of Reading in the Dark.

Reading in the Dark Summary & Study Guide includes comprehensive information and analysis to help you understand the book. This study guide contains the following sections:

This detailed literature summary also contains Topics for Discussion and a Free Quiz on Reading in the Dark by Seamus Deane.

Reading in the Dark is the personal account of the boy narrator's childhood and youth in 1940s and 1950s Northern Ireland. The boy's Catholic family has associations with the Irish Liberation Army (IRA) and through his telling of the family's story we learn how politics and wider events can have deeply wounding effects on individuals and their personal relationships.

The storyline centers on the mystery surrounding the boy's Uncle Eddie, his father's brother, who reputedly escaped from Northern Ireland after being discovered as an IRA informer, following the famous shoot-out between the police and the IRA at a local distillery in 1922. Over time, the boy discovers that his uncle was actually executed as an informer by his own people; the boy's grandfather-his mother's father-ordered the murder. It later emerges that Eddie was innocent and that the real informer was a man called Tony McIlhenny. McIlhenny had married the boy's Aunt Katie but had disappeared shortly after, never to be seen again. The boy discovers that his mother had had a relationship with McIlhenny before he married her sister and that it was his mother that tipped McIlhenny off, allowing him to escape the country. Later she met and married the boy's father and only then realized the pain that had been caused to him by his brother's death; she does not learn until much later that it was her own father who was responsible.

The mystery of what happened to Eddie and the events surrounding it gradually unfold throughout the novel, with various characters revealing pieces of information to the boy until he is aware of the whole story.

Much of the information about Eddie and McIlhenny was kept secret over the years and the boy never fully understands whether his father ever suspected or knew about his wife's earlier relationship with McIlhenny. A major theme running through the novel concerns the choices that individuals make about whether to keep secrets or to share the information and the impact that these choices have on themselves and other people. Through the choices that they have made, the boy observes how his own family members effectively destroy their own lives and the pain they have to live with.

The events of the novel and the actions of the main characters are strongly influenced not only by the very strict religious beliefs that dominated so many aspects of life in Northern Ireland at that time, but also by the co-existence of strong traditional beliefs about the supernatural. The boy is told many stories of people in his own community being haunted by evil spirits and demons and even these stories are intertwined with his family history and with events in his own day-to-day life.

More summaries and resources for teaching or studying Reading in the Dark.

Reading in the Dark from BookRags. (c)2022 BookRags, Inc. All rights reserved.