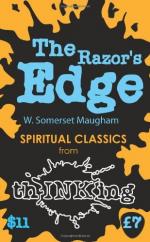 Before Maugham leaves Chicago, Isabel asks him to stop for an ice cream soda at a drugstore. Here, she tells him the details of her confrontation with Larry about her future, a conversation that ends with him leaving for Paris. It's the start of a long relationship and many long personal conversations between Isabel and Maugham.

After growing tired of Paris, Larry leaves for a coal-mining town near the French city of Lens. He becomes a mineworker and meets Kosti, which leads to his travels in Germany.

While running errands with Elliott, Maugham notices the crest on Elliott's boxer shorts. The crest is a Count's crest, an honor bestowed upon Elliott by the Catholic Church for his donations toward building a new church. Elliott also avoids the stock market crash through his relations with the Catholic Church, because he gets financial advice...