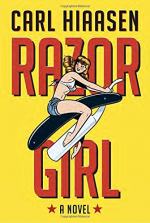 Carl Hiaasen
This Study Guide consists of approximately 53 pages of chapter summaries, quotes, character analysis, themes, and more - everything you need to sharpen your knowledge of Razor Girl.

When Lane Coolman drives from Miami International Airport to Key West, he almost makes it to his destination in Carl Hiaasen’s novel Razor Girl (Kindle Edition). An accident stops his progress, however, and he makes the near fatal mistake of giving the girl who bumps into him, Merry Mansfield (Razor Girl) a ride. As it turns out, the accident was a scam, run by Merry who rear-ends people and then delivers them to members of the mob. This time, though, she got the wrong person.

While Merry and her accomplice try to figure out what to do next, Coolman worries about Buck Nance, the man he was supposed to meet in Key West. Lane was on his way to a bar called The Parched Pirate to help Buck, the star of a reality show called Bayou Brethren, successfully get through a live performance. Without Lane, Buck gets nervous, forgets his lines and improvises. The problem is that his impromptu jokes include racial slurs against some of the bar's patrons. They run him out of the bar. He escapes to the kitchen of a restaurant that happens to be co-owned by the mayor. He then cuts off his exquisite beard, leaves it behind, shoplifts to get clothes and goes into hiding.

Meanwhile, Merry manages to save Coolman, who cannot get anyone to send ransom money for him and cannot provide his own money due to a nasty divorce which is in progress, by providing a means for Coolman to escape. Coolman calls his boss, Amp, who tells him not to come back until he finds Buck.

Due to the hair in the kitchen, Andrew Yancy, a former policeman who has been demoted to a health inspector, has to go the restaurant, Clippy’s, to investigate. Pretty quickly, the police determine that the beard hair belongs to Buck. Yancy starts to look for Buck and comes across some leads. Things get more interesting for him, however, when a Muslim man suspiciously falls off a train after being harassed by someone who fits Buck’s description. Yancy teams up with Merry, whom he meets along the way, and the two try to solve the possible murder. Yancy hopes that in doing so, he will get his badge back.

The investigation leads Yancy to a tattoo shop. There he discovers that the man who got the tattoo that the harasser on the train bore is not Buck, but a man named Benjamin Krill. Inspired by Buck and his performance, Krill begins to do things that he thinks Buck would do. This includes harassing the Muslim man. He has also kidnapped Buck and Coolman. He hopes to become Buck’s best friend, but Buck disappoints him because, in reality, Buck’s TV persona is just that, a TV character and the more he observes Krill, the further he becomes removed from it. Coolman, however, buys time for the two men by convincing Krill that he can get him on the show. Yancy finds them, but Coolman convinces him to wait until he can sign deals for himself and Buck. Then Yancy can have Krill.

Krill, however, becomes more and more dangerous, and Yancy has to intervene. Krill takes over, though, and orders Yancy to drive them to the airport. When Yancy deviates from the planned destination, Krill becomes even angrier. Then Merry shows up and rear-ends the car. Krill gets knocked out, but comes to, and points a gun at Yancy. At that point, Buck jumps Krill and breaks his neck.

While all of this is going on, Yancy is also trying to keep the owners of the plot next to his from building a humongous house that will block his view. The owners of the plot are a Miami lawyer who is famous for his litigation cases and his future wife, Deb. Deb loses her engagement ring and Yancy finds it, but does not return it. This delays construction while the couple hires people to look for it. Then Yancy plants a tooth and has an actor friend of his pretend that the tooth is part of what could be an important historical find. Thus, the couple cannot build until it can be deemed whether the plot is a historical site, or not.

After an attempt to get the diamond back, which works but it ends up on the finger of the future daughter-in-law of Big Noogie, a Mafia boss, and a failed attempt to get Yancy to sell his property to them, Brock does as Big Noogie (who owes Yancy a favor) suggests and sells Yancy his property for a very low price. Brock and Deb go their separate ways and Brock dies due to the side effects of the product he was handling a class-action suit against.

In addition to that, the man whom Merry was supposed to hit (and finally does), Martin Trebeaux, does not learn from his kidnapping experience. He continues to try to outsmart the Mafia and then makes a fatal error. He has sex with Big Noogie’s girlfriend, Juveline. Big Noogie finds out and orders Martin’s death.

After Krill’s death, Yancy meets with the sheriff and finds out that he will not be getting his badge back because he still causes too much bad press. Part of that includes the fact that he was caught kissing Merry and the sheriff knows that she has a questionable past at best. He tells Yancy that if he wants to get on his good side, he needs to stay out of trouble.

Yancy goes home and finds out that his girlfriend who moved to Norway, a place that he cannot live due to the cold, and is dating another man. He takes Merry out on the boat as the novel ends.

More summaries and resources for teaching or studying Razor Girl.