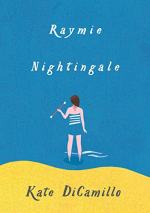 Raymie Clarke's father, Jim, has run away with a young woman. Raymie and her mother are very sad and Raymie believes that their lives will be better if her father will just contact her. She develops a plan toward that end of winning the Little Miss Central Florida Tire pageant, so that her picture will be in the newspaper. Raymie imagines that her father picking up the paper and seeing Raymie's picture will be prompted to pick up the phone and call Raymie.

Raymie begins taking baton-twirling lessons intending to present that as her talent in the pageant. During the first lesson, Raymie meets two other girls, Louisiana Elefante and Beverly Tapinski, who are taking lessons with the same goal in mind. Louisiana is an orphan and she merely wants to win the prize money from the pageant. Beverly is already an accomplished twirler but her mother has pushed her into taking the lessons. She does not want to take lessons or enter the pageant, and she initially plans to sabotage the pageant as a way of getting out of it.

The girls' baton teacher is eccentric and shows little interest or ability in teaching the girls. They are often left on their own and begin to form a friendship. Beverly is reluctant at first. She seems like an angry girl but she is actually just facing the absence of her father who has moved to New York.

Raymie tries to perform a good deed, which is one of the requirements of the pageant. She plans to read a book about Florence Nightingale to residents of a local nursing home. However, one of the residents frightens her into losing her book and running away. When one of her baton lessons is canceled, Raymie convinces Beverly and Louisiana to help her get the book back. They succeed, which gives Louisiana an idea. She convinces Beverly and Raymie to help her try to get her cat back. Louisiana believes Archie the cat is at a local shelter, but Beverly is convinced from the beginning that Archie is actually dead.

The girls break into the building they believe is an animal shelter and discover a dog is the only animal in the building. They rescue the dog and Louisiana calls him Bunny, because of his big ears. Louisiana cannot walk after discovering that Archie is not there. Beverly and Raymie push her in a shopping cart but lose control and the cart crashes into a pond. Raymie knows that this moment is why she took a class in lifesaving. Without a second thought, she jumps into the pond and pulls Louisiana out. She then beats on Louisiana's back until she begins breathing again.

Beverly and Raymie carry Louisiana to the hospital where a nurse rushes to care for her. Raymie finds herself spilling the entire story to another nurse, including that her father has run away. Reporters soon learn about the events and take Raymie's picture, running a story in the newspaper. Raymie remains at the hospital with Louisiana and she is there when her father calls. As soon as she hears his voice, she realizes that she has nothing to say to him.

Beverly and her mother have a long conversation outside the hospital and the seem to come to an understanding about the pageant. Beverly does not participate. Raymie no longer has a motivation for being in the pageant and she also drops out. Louisiana sings for her talent, and Raymie is not surprised when Louisiana wins, earning the money that is so important to Louisiana and her grandmother.