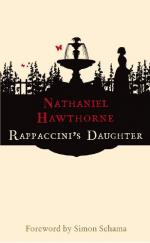 Nathaniel Hawthorne
This Study Guide consists of approximately 21 pages of chapter summaries, quotes, character analysis, themes, and more - everything you need to sharpen your knowledge of Rappaccini's Daughter.

This detailed literature summary also contains Topics for Discussion and a Free Quiz on Rappaccini's Daughter by Nathaniel Hawthorne.

Rappaccini's Daughter is a short story about a young student called Giovanni who falls in love with a girl called Beatrice. Unfortunately, the poison from her father Rappaccini's garden has contaminated her. One touch from Beatrice and Giovanni will die. While his friend Baglioni gives Giovanni the antidote to cure Beatrice to cure her, his motives are from innocent.

The story begins as Giovanni arrives at his lodgings in Padua. It is the first time that he has been to northern Italy - his family home is from the south - and his naivety is obvious from the start. When his landlady, Lisabetta, tells him to put his head out of the window to feel the northern sun, he does as she says, but is immediately disappointed. The sun nowhere near as hot as it is at home. Yet turning his head, he sees something that impresses him even more: a garden full of beautiful plants and flowers.

Lisabetta tells Giovanni the garden belongs to a scientist called Rappaccini - a man, she claims, known as far as Naples. Giovanni is impressed and waits at his window to catch a sight of the great man. It is not long before he arrives. Rappacini is a dark, ill-looking, and cold-hearted figure. His only aspect that impresses Giovanni is the way that he studiously and very carefully looks at the flowers. He is obviously a man of great intellect. Giovanni is unprepared, however, for his daughter Beatrice. Walking into the garden like an angel, she is breath of fresh air and unlike her father, treats the flowers like her friends.

The next day Giovanni introduces himself to the family friend and university professor, Professor Baglioni. He knows Rappaccini personally and warns Giovanni, to stay away from him. Rappaccini has no interest in humankind. His interest is to create increasingly dangerous poisons from his plants. The plants, he claims, have contaminated his daughter and she cannot leave the garden. What Baglioni does not tell Giovanni is that Rappaccini is his rival. They hate each other.

Giovanni is in love with Beatrice and despite warnings, he buys her a bouquet of flowers. He can't go into the garden so he waits for at his window. Finally, she dances into view, smelling the flowers and approaching, with reverence, a purple plant next to a fountain. As she lifts the plant to smell its flowers, a dewdrop falls from a petal and onto the back of a passing lizard. The lizard immediately dies.

Giovanni can't stop thinking about Beatrice, wandering the Padua streets in a daze. One day he passes Baglioni without saying a word and the professor has to grab him to get his attention. As the same time, Rappaccini walks past them. He greets Baglioni with open contempt, but looks upon Giovanni with great interest. Baglioni is worried. Rappaccini, he tells Giovanni, maybe interested in him as a subject for one of his experiments.

On his return home, Lisabetta approaches Giovanni excitedly. She tells him she has found a secret entrance into Rappaccini's garden. After Baglioni's warning, he is automatically mistrustful, but eventually his love for Beatrice overrides his suspicions and he follows his landlady to the garden.

At last, in Rappaccini's garden, Giovanni looks at the flowers with interest and to his delight, Beatrice comes into to view. She is ecstatic to see him. She receives few visitors and can't stop talking. Giovanni high on love and his beautiful surroundings walks to the purple flower that rises from the edge of a marble fountain in the center of the garden. Beatrice screams like a gunshot. Whatever he does, she screams, he should never touch the plants. She is immune to the plants' poisons, but if Giovanni touches one, he could easily die. Before he leaves Giovanni sees Rappaccini, looking on from the garden entrance.

After weeks of not seeing him, Baglioni visits Giovanni at his lodgings. Immediately he can see his friend is hopelessly in love. He warns him that Beatrice maybe leading him to a trap, but has to back off when Giovanni reacts badly to his negative words. Instead, Baglioni offers him a silver phial. inside the phial, there is a liquid that he says will cure Beatrice if she drinks it.

Before Giovanni goes away with the antidote to Beatrice, he looks into the mirror. He looks happier than ever. A spider is crawling over the mirror and he move forward for a closer look. When he is inches away, the spider drops dead. His breath has killed it. He is contaminated with the poison from the garden.

In the garden, Giovanni questions Beatrice of her motives. She is horrified. She claims that she is completely innocent and to prove herself she drinks the antidote from the silver phial. At the same time, her father enters the garden. He tells her she is no longer alone and to consummate her relationship with Giovanni, she should push one of the purple petals to his bosom. Beatrice, however, is dying. She asks her father why he has stopped her from being the woman she wanted and needed to be, but her father doesn't want to hear it. He berates her for choosing to be weak. As she dies, Baglioni's face appears at Giovanni's window with a mixture of horror and triumph.

More summaries and resources for teaching or studying Rappaccini's Daughter.