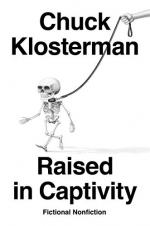 Chuck Klosterman
This Study Guide consists of approximately 66 pages of chapter summaries, quotes, character analysis, themes, and more - everything you need to sharpen your knowledge of Raised in Captivity.

The Play in “Execute Again”

The conceit in “Execute Again” is that the football play taught by Coach Jasper Lovelace is a symbol of outrageous success and personal excellence. The play was complex, requiring “intricate footwork” (15) and absolutely perfect execution, and when the narrator lists the accomplishments of the other players (one is now the president, one invented an artificial lung, and one is a world-class architect), the implication is that the play prepared them to achieve their goals. Even the narrator is exceptional, as he was convicted of killing 261 people, which would make him a wildly successful murderer.

The song “Blizzard of Summer” in the story of the same name is a symbol of both the opacity of (some) art and the ignorance/incoherence of white supremacists. In the story, the song is adopted as an anthem by the...

More summaries and resources for teaching or studying Raised in Captivity.