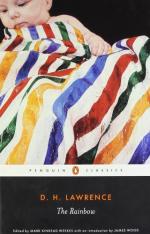 D. H. Lawrence
This Study Guide consists of approximately 50 pages of chapter summaries, quotes, character analysis, themes, and more - everything you need to sharpen your knowledge of The Rainbow.

The Rainbow Summary & Study Guide includes comprehensive information and analysis to help you understand the book. This study guide contains the following sections:

This detailed literature summary also contains Related Titles and a Free Quiz on The Rainbow by D. H. Lawrence.

The Rainbow chronicles three generations of Brangwens living near Marsh Farm. Sexually stormy marriages set the stage for conflict and power struggles within the home. Tradition, passion, children, and compromise define the Brangwen clan, giving its members both happiness and sadness. Ursula Brangwen, the granddaughter of the original Brangwens, takes on the pressures of her upbringing in order to experience life and love on her own terms.

The Brangwen family has lived at Marsh Farm for many generations. The family has a long established connection with the earth. When Tom Brangwen inherits the farm, he wants to add excitement to his life by marrying Lydia, a recent widow, and a Polish exile. Lydia has a daughter, Anna, from her previous marriage. Tom and Lydia's marriage is distant and silent. They do not understand each other, but have a strong sexual connection. During Lydia's pregnancy with Tom's children, Tom and Anna bond. Tom and Anna remain extremely close throughout her childhood. When Anna grows up, Tom has a difficult time dealing with Anna's marriage to his nephew, Will. Tom objects to Will and Anna's marriage at first, but eventually agrees to help them out.

Anna and Will set up their own home in a nearby cottage. They enjoy the first weeks of their marriage but quickly return to normal routines. Their marriage is full of passion, but is often sidetracked by many pregnancies. Anna is obsessed with fertility and Will withdraws into his handicraft hobbies. The only thing that bonds them to each other is sex. They battle each other for dominance in their stormy marriage, although neither one thinks that they are capable of understanding each other on anything other than a sexual level.

Will and Anna have eight children, the oldest of which is Ursula. Ursula dislikes having to take care of her younger brothers and sisters and longs for a more meaningful life. During her schooldays, she dreams of the life of the upper classes and explores her religious faith. She is often conflicted about the role of Christianity in everyday life. She falls in love with Anton Skrebensky, the son of an old family friend. When he goes to fight in South Africa, they are unsure how their relationship will progress.

Ursula finishes school after forming a relationship with one of her female teachers, Miss Inger. She is confused by Miss Inger's sexual advances, but eventually introduces her to her homosexual uncle. Miss Inger and the uncle marry to cover their homosexual activities. Ursula accepts a teaching position in a poor neighborhood, but continues to live at home. Ursula dislikes teaching, and particularly dislikes the corporal punishment she is forced to inflict on her students. After teaching for two years, she goes to college to get her degree. She enjoys the first year of college, especially Botany. Meanwhile, her father has been promoted as an Arts and Handicrafts Instructor for the county. The whole family moves to a bigger house in a fancier neighborhood. They enjoy their new social position.

During her last year of college, Ursula reconnects with Anton Skrebensky. During his six-month leave from the army, he and Ursula begin an affair. Ursula loses interest in her classes and routinely leaves school to be with Anton. During the Easter holidays, the two of them go on holiday together, pretending to be married. Ursula fails her university exams and gets engaged to Anton. Ursula does not really want to marry Anton and calls off the engagement shortly before he leaves for India. After he leaves, Ursula realizes that she is pregnant. She tries to contact Anton, but he does not reply to her letters. She miscarries and loses her baby. She discovers a new independence and starts her life again.

More summaries and resources for teaching or studying The Rainbow.

The Rainbow from BookRags. (c)2022 BookRags, Inc. All rights reserved.