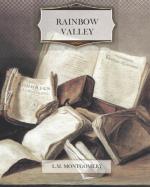 Lucy Maud Montgomery
This Study Guide consists of approximately 46 pages of chapter summaries, quotes, character analysis, themes, and more - everything you need to sharpen your knowledge of Rainbow Valley.

"Rainbow Valley" by L. M. Montgomery is the seventh in the "Anne of Green Gables" series. This story takes place in the conservative community of Glen St. Mary in Nova Scotia. The story unfolds when the town busybody, Mrs. Marshall Elliot, who everyone calls Miss Cornelia, is on her way to Ingleside, the residence of Anne Blythe and her husband, Dr. Gilbert Blythe. The Blythes had just returned from a long vacation to Europe. Their four eldest children were sent to Anne's childhood home in Avonlea and Green Gables. The two younger children stayed behind with Susan, the family's nanny. Miss Cornelia was anxious to see Anne but also to gossip about the new Presbyterian minister.

Miss Cornelia was one of the church members who decided on John Meredith as their new minister. There were issues with Mr. Meredith but the problems with other candidates were considered worse. Mr. Meredith was a widower and had four children who he moved into the church's manse with his elderly Aunt Martha. The problem with John Meredith was his remoteness and his dreamy attitude. However, he did come alive when he gave the Sunday morning sermon. The old maids in the area had not failed to notice that the new minister was quite handsome and, as a widower, quite available.

The four older Blythe children, Jem, Walter, and the twins Nan and Diana, loved to play in a lovely valley that was filled with beautiful trees and flowers and haf a babbling spring that ran through it. The children dubbed the area "Rainbow Valley" after a rainbow made a huge arc over it one afternoon. The new minister's four children, referred to as the manse children, were named Jerry, Carl, Faith and Una. One day they ventured down into the valley and met the Blythe kids and they all became fast friends.

Another young girl becomes a new member of the Rainbow Valley friends when the manse kids find her sleeping in Mr. Taylor's barn. Mary Vance was an orphan and had run away from the family she was staying with. The woman, Mrs. Wiley, treated her like a slave and beat and starved her. The manse kids took Mary in and eventually she was adopted by Miss Cornelia who had no children.

The manse children were allowed to run free by their preoccupied and distant father who was also wrapped up with his studies, his pastoral responsibilities and his grief for his late wife, Cecilia, who died four years before. The children became a thorn in the side of the prim and proper members of the community. The kids were all wild but Faith was considered to be the worst. She was always in trouble and it always reflected badly on her father. Faith went to great lengths to explain and defend her behavior but mainly to rescue her father's reputation and, in some cases, his job. Faith and the other manse kids were not mean-spirited and never meant any harm. But they were undisciplined because their father was not engaged in their activities.

One moonlit night John stopped in the valley to get a drink of water at the spring and ran into Rosemary West. He barely knew her but in the moonlight that night, he had never seen a more perfect beauty than Rosemary. He was smitten from that point on. Rosemary's fiance was a sailor who lost his life at sea. Both John and Rosemary thought that romance was no longer in their grasps.

But there were a few stumbling blocks in their courtship including Rosemary's selfish older sister who held her to a promise to never leave her alone. Rosemary was forced to turn down John's proposal because of her sister's refusal to release her from her vow. However, when things with the children get so bad that John was completely at a loss, young Una overheard him pining for Rosemary. Una rushed to Rosemary and asked her to marry her father. Once a few misunderstandings were cleared up, the two reunite in Rainbow Valley. John loved Rosemary and wanted her to be his wife. But he also loved his children and wanted them to have a loving and caring mother whom he knew he had found in Rosemary.

More summaries and resources for teaching or studying Rainbow Valley.