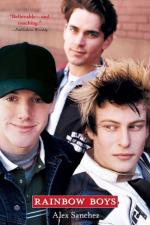 Alex Sánchez
This Study Guide consists of approximately 37 pages of chapter summaries, quotes, character analysis, themes, and more - everything you need to sharpen your knowledge of Rainbow Boys.

This detailed literature summary also contains Topics for Discussion and a Free Quiz on Rainbow Boys by Alex Sánchez.

Rainbow Boys is the story of three gay, teenage boys struggling to balance their true identities with the expectations of society around them.

Rainbow Boys is recounted from the revolving perspective of three gay teenagers in various stages of sexual realization. Nelson is out and proud. Everyone around him, including his parents and friends, know that he is gay. Kyle, the star of the school swim team, knows he's gay but hasn't yet come out to his family. Jason has a girlfriend but isn't satisfied. He feels like there's something he's hiding, even from himself. As the novel progresses, Jason realizes that he is gay but is too afraid to admit this even to himself.

The novel focuses mainly on the relationship between these three boys. Nelson and Kyle are best friends, but it is clear that Nelson is in love with Kyle. Kyle is in love with Jason, who hasn't even realized that he's gay. At the opening of the novel, Jason has convinced himself to attend a Rainbow Youth meeting, a meeting for gay teenagers. He hopes that attending this meeting will convince him, once and for all, that he's actually not gay. He's terrified to admit that he has romantic dreams involving other men and that his sex life with his girlfriend has begun to suffer. At the meeting, he is horrified to see two kids from his high school, Nelson and Kyle, and fears that they will oust him.

Kyle is thrilled to see Jason at the meeting - he's had a crush on him forever - but Nelson is annoyed. As the novel progresses, Jason and Kyle start up a friendship when Jason struggles in math, Kyle's best subject, and needs a tutor. After a few of those meetings, when Jason is feeling emotionally vulnerable after a fight with his alcoholic father, he and Kyle kiss. Jason's heart nearly tears open. He realizes that he is gay and that he is falling in love with Kyle. Then fear sets in as he realizes he is going to have to tell his family, and his girlfriend, the truth. Unlike Kyle and Nelson, who have strong, albeit reluctant, support systems, Jason's father is an abusive alcoholic who will surely disown him if he knows the truth.

As Kyle and Jason's relationship progresses, Nelson sinks further and further into depression. He is in love with Kyle, but Kyle sees him only as a friend. Desperate for attention, Nelson loses his virginity to a random older man he meets online. His sadness turns to fear when he realizes that they didn't use a condom and he might have been infected with HIV. The friendship of the three boys grows as they trust each other with their deepest, scariest secrets. Nelson turns to Kyle for support when he decides to have an HIV test, and Kyle turns to Nelson for support when he feels vulnerable about his relationship with Jason. As time passes, as his love for Kyle grows, Jason too begins to rely on his friends for support as he comes out to his family and friends. His trust is so strong that by the end of the novel, Jason attends the first meeting at his high school to promote education about homosexuality. It is a huge step in his personal development and one he never could have taken without the love and support of his friends.

More summaries and resources for teaching or studying Rainbow Boys.