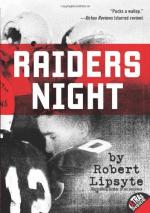 Robert Lipsyte
This Study Guide consists of approximately 35 pages of chapter summaries, quotes, character analysis, themes, and more - everything you need to sharpen your knowledge of Raiders Night.

Matt seems to have everything going for him. He is the co-captain of his football team, popular, and good-looking. His father pays for him to take steroids to buff up and help the team be the best it can be, but it's not all rosy. Matt can't stand his father and wants to get away from him. He gets an opportunity to have a break from his father when he joins his team for a week of football camp. It's something he is really looking forward to. This year, a new, promising player is joining them. Matt sees the boy's natural athletic ability even as the boy boards the bus. The other co-captain, Ramp, isn't pleased about the new player.

At camp, Matt feels differently than he did in previous years. The social scene doesn't excite him as it used to. He immerses himself in the football and enjoys his solitude when he gets it. Ramp and his friends continue bullying Chris, the new player. Chris stands up to them and displays phenomenal athletic ability. It makes Ramp even more angry, and at the freshman initiation, he rapes Chris with a bat, stunning Matt and the others. They don't know what to do. Back at home, Matt tries to block out the incident, yet he and his friends are still wondering what they should do about it. There is dissension among the team members as the season begins.

When school starts up, things go according to routine, but Matt feels that something is different. The team isn't playing as well as they used to and Ramp continues to take measures to divide team members by planting malicious gossip. Mandy, Matt's former girlfriend, is jealous and upset about the time he is spending with Sarah.

Chris doesn't show up for practices, and the coach asks Matt to talk with him. Mr. Koslo sends a limo to take the two boys to a Yankees game so they can relax and talk. Matt tells Chris to put the past behind him and really become part of the team. They need him. This fact is true since the team is falling apart thanks to rumors of homosexuality and police questioning about drug deals and what might have happened to Chris at camp. Matt realizes the adults know more than they are letting on, but they hint that everything has to be kept quiet or the team will fold.

Ramp and Chris are giving the team a pep talk when Chris comes in and aims a gun at Ramp. When Ramp taunts him, he turns the gun on himself. Matt tackles him as the gun goes off, and he lives but is sent to the ICU. Matt and Sarah visit him there and find out that no-one else has visited. Matt decides to tell the coaches what happened and discovers that they already know. He and his friends realize that they need to get the story out even though it might shut the football season down.

More summaries and resources for teaching or studying Raiders Night.