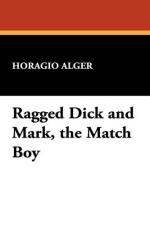 Horatio Alger, Jr.
This Study Guide consists of approximately 29 pages of chapter summaries, quotes, character analysis, themes, and more - everything you need to sharpen your knowledge of Ragged Dick and Mark, the Match Boy.

This detailed literature summary also contains Topics for Discussion and a Free Quiz on Ragged Dick and Mark, the Match Boy by Horatio Alger, Jr..

Ragged Dick and Mark the Match Boy, by Horatio Alger, is a book intended for young boys. The author, a late nineteenth century writer, is concerned with social values and steering boys into a healthy and good life. His books tell the typical rags to riches story of the poor boy who studies and works hard, lives a clean life and becomes successful. The message to boys is not to drink or smoke or waste their time and money on frivolous entertainment. Apply themselves to their studies and work, and they will be able to improve their lot in life. This is the story told in Ragged Dick and Mark the Match Boy.

Ragged Dick is the story of an orphan who is a boot-black. He lives on the streets and has to fend for himself. One day he offers his services as a tour guide to the nephew of a prosperous man. They outfit Dick in new clothes and Dick and Frank, the nephew, spend the day talking as they sightsee. Frank encourages Dick to make changes in his life. His own uncle began poor and made himself into a success. That night, Frank's uncle gives Dick five dollars and advises him to find a room in a boarding house, save money and study. Dick follows his advice. Henry, another boot-black, can read and write and agrees to tutor Dick in exchange for lodging.

The two boys live frugally and work to help one another. Instead of spending time and money on entertainment, they use it to study and improve their situations. They eventually both find good jobs.

Mark the Match Boy basically continues the story some three years after Ragged Dick ends. Both men have progressed in their jobs and education. They eventually help a match boy named Mark, who becomes Dick's ward. While this is happening, they are trying to locate the grandson of the wealth Hiram Bates. It turns out that Mark is the missing grandson.

Two characters in the book, Roswell Crawford and Ralph Graham, show what happens to those who don't live the kind of life promoted by Alger. Both have low paying jobs because they can't hold a job for long. Ralph talks Roswell into stealing from his employer. This is the only way that they can afford the kind of entertainment that they want. Roswell is caught stealing and loses his job.

Horatio Alger is known to have been a proponent of social values. The message of his books is loud and clear for boys. Don't smoke or drink or spend time and money on wasteful entertainment. Work hard, study hard and save money. This is the path to improving social status and one's financial position. The stories, which are intended for boys, are interesting reading for adults.

More summaries and resources for teaching or studying Ragged Dick and Mark, the Match Boy.