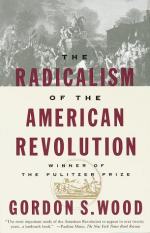 The Radicalism of the American Revolution Summary & Study Guide

Gordon S. Wood
This Study Guide consists of approximately 59 pages of chapter summaries, quotes, character analysis, themes, and more - everything you need to sharpen your knowledge of The Radicalism of the American Revolution.

The Radicalism of the American Revolution Summary & Study Guide Description

The Radicalism of the American Revolution Summary & Study Guide includes comprehensive information and analysis to help you understand the book. This study guide contains the following sections:

This detailed literature summary also contains Topics for Discussion and a Free Quiz on The Radicalism of the American Revolution by Gordon S. Wood.

The Radicalism of the American Revolution examines why, within the three-quarters of a century, American colonists threw off millennia-old social patterns and became the most democratic people in the world.

In the 18th-century English-speaking world, monarchy links everyone upwardly and downwardly in gradations of freedom and servility. Hierarchical inequality assigns everyone a place and connects them vertically, superior to some and subservient to others. All men are not created equal. Poverty is virtuous for common folk, because it keeps them industrious, while aristocrats live on "unearned income," accept the obligation of public service, and treat inferiors and subordinates like children. Diffuse and delicate webs of paternalistic obligation link people reciprocally and complementarily. Subjects are expected both to look upward for benefits and to please superiors. Royal patronage is still powerful enough in America to cause exasperation and anxiety in the colonies, but "corruption" enters the political lexicon, and much of the political squabbling centers on the social and moral respectability of leaders.

Social equality primes monarchical America for republicanism. With increased migration, social bonds break down. Farm families take part in "proto-industrialization" to raise their living standards. Society seems less ordained by God and more man-made and increasingly arbitrary. By adopting enlightened standards of paternalism, rulers of all sorts are collaborating in the weakening of their authority. As the genteel become preoccupied with the meaning of parentage, the new meanings translate to all power relationships, and rebellion becomes the fault of the unloving, uncaring ruler. The idea of contract next colors the parent-child relationship, and the mother country-colony relationship is seen to rest on policy, not nature. In 1763, the British government taxes the colonists, who have not been prepared by the harmony achieved between centralized and local authorities in Britain. The colonists scream "corruption." The revolutionaries' goal is to destroy the "secret bonds of society:" family, blood and personal influence. They wanted to substitute self-love, which creates benevolence, which creates private happiness. Man's natural tendencies have only to be freed of civil impediments in order for society to prosper. Leaders early on grow concerned the people will not be virtuous, trusting and unselfish enough to realize the utopian goals. Expectations of better living standards breed competition and individualism rather than benevolence and selflessness.

Enfeebled by republicanism, the traditional social structure bursts, and equality proves far more revolutionary than the founders expect. Still, they plan a new federal government to be a "disinterested and dispassionate umpire." It proves too much, and political parties form, exercise iron discipline and bind members to them through patronage. The Jacksonian revolution legitimizes, restrains and controls democracy. It reconciles Americans to it, while infusing more elements of monarchy than the Federalists dared try. Jackson introduces the "spoils system," along with safeguards to counter corruption. Protecting private property and minority rights is the great problem of democratic politics. Ordinary Americans grow absorbed in the individual pursuit of money. Voluntary associations fill the social void. The rationalism and skepticism most revolutionaries share are swept away in the "Second Great Awakening," but religion fails to bring social adhesion. Pecuniary ties join family, law and associations as ligatures of society. Labor becomes a commodity to be bought and sold. "Middling sorts" gain a moral hegemony over society by absorbing the gentility of the aristocracy and the work of the working class. Democratic society is not what the revolutionary leaders want or expect, but their revolution has succeeded too well. The founders are elevated into mythic figures, but their views give way to a new generation's own experience.

More summaries and resources for teaching or studying The Radicalism of the American Revolution.

The Radicalism of the American Revolution from BookRags. (c)2022 BookRags, Inc. All rights reserved.