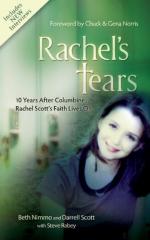 Beth Nimmo
This Study Guide consists of approximately 22 pages of chapter summaries, quotes, character analysis, themes, and more - everything you need to sharpen your knowledge of Rachel's Tears.

Dylan seemed like a normal guy. If anything, he was kinder than most others. There were moments that foreshadowed trouble, though. He and Eric burglarized the van and were part of the Trench Coat Mafia. When he was bowling he would sometimes say "Heil Hitler!"

Eric was an excellent student with a good sense of humor, but he was also a prankster who enjoy playing violent video games. He has a website filled with angry, aggressive statements. He began using a notebook to detail his plans for the Columbine shootings a year before he and Dylan followed through with the plan.

Darrell felt that the events of that tragic day were a result of peer pressure and a lack of parental intervention.

The author felt that many young people today were raised in a culture that was devoid of...