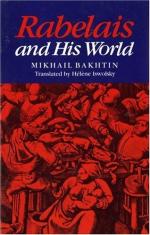 Mikhail Bakhtin
This Study Guide consists of approximately 33 pages of chapter summaries, quotes, character analysis, themes, and more - everything you need to sharpen your knowledge of Rabelais and His World.

Rabelais and His World Summary & Study Guide includes comprehensive information and analysis to help you understand the book. This study guide contains the following sections:

This detailed literature summary also contains Topics for Discussion and a Free Quiz on Rabelais and His World by Mikhail Bakhtin.

This is a work of literary criticism, by Mikhail Bakhtin. There is a note on the back that states that the author accurately represents the change in Russia from the nineteenth to the twentieth centuries. His work has grown prominent in Russia—both Soviet Russia and Post-Soviet Russia in the second half of the twentieth century. The work is a relatively contemporary analysis of a bygone era of Russia. Not only does this survey the Middle Ages and the Renaissance from the 20th century perspective, but it does something unusual as well; the author analyzes a cultural form—the carnival.

The entire work has been translated for the convenience of English readers throughout the world. There are introductory pieces designed to orient readers to the correct way to understand this piece of literary criticism. There are seven chapters and three forwards with an index for a total of eleven clear sections of the text. These will be covered below in their order. Approximately every 50 pages will be covered by a chapter. For the purposes of elucidating the author's style and technique, there may be some variations in this practice.

The author Bakhtin lived in an age that was post-revolution. Rabelais, 400 years earlier, had lived in a similar epoch. Mikhail is writing a work that is intentionally theoretical and designed to be transcendent. Cultures and historical periods often provide limitations to writers, limitations that Mikhail Bakhtin has transcended. Mikhail was the shadow cultural figure in a world where Maxim Gorky proved prominent in the creation of new official Russian cultural ways. Included in this were some important recommendations made on the basis of awareness of what had fed into conditions that led to a successful revolution. This involved "the folk" and numerous elements of the traditions surrounding satire, plays and other elements of carnivals and humor. Those who have heard of political messages hidden with the folk tales of other European peoples are on track with the kinds of issues involved in being transformed from a largely illiterate, oral society into a literate system with a new order. Between the events that have taken place in and around Russia and their timing, there are a number of circumstances of the author's life and work that will be perceived as extreme and reactive when compared to less heated times in history or in more stabile cultures.

More summaries and resources for teaching or studying Rabelais and His World.

Rabelais and His World from BookRags. (c)2022 BookRags, Inc. All rights reserved.