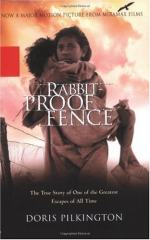 Doris Pilkington Garimara
This Study Guide consists of approximately 25 pages of chapter summaries, quotes, character analysis, themes, and more - everything you need to sharpen your knowledge of Rabbit-proof Fence.

This detailed literature summary also contains Topics for Discussion and a Free Quiz on Rabbit-proof Fence by Doris Pilkington Garimara.

Rabbit-Proof Fence by Doris Pilkington is the true story of the escape of three young girls from a settlement school they were forced to attend in Australia, over one thousand miles away from their families and homes. The three girls, along with many others, were mandated to be transferred to Moore River Settlement School, which was a school for half-caste Aborigine children. With the influx first of white raiders and pirates and then "peaceful" English settlers, there was a multitude of half-English children. The government considered these children a step above full-blooded Aborigine children and felt obliged to take them to schools where they could be educated. These youngsters were unceremoniously snatched from their families and carted off to these settlements.

Molly, at fourteen, was the eldest of the three girls who are at the heart of the story. She, along with her relatives Gracie, eleven, and Daisy, just eight years old, were dismayed and frightened by their fate. Molly, a free-spirited girl and natural leader, decided on the evening before the first day of school that she and her two friends would control their own destiny. In the morning, she announced to the other two girls that they would be escaping. They were running the risk of being recaptured and punished. Anyone who tried to escape was placed in the "boob" (jail), beaten with a strap, had their heads shaved and were given only bread and water for a week. Molly was told that no one had ever successfully escaped. But Molly was undeterred. She was determined that she and her little friends would return to the people who loved and cared about them.

Molly's father was a white man who was the inspector of the rabbit-proof fence. The purpose of the fence was to keep the over-population of rabbits in the eastern Australian regions from coming into Western Australia. Molly learned from her father that the fence was installed from north to south for almost the entire length of the country. She knew that once she and the girls found the fence that it would lead them home.

The girls set off with only bread crumbs in their calico bags. They walked barefooted through thick forests and wide heathlands. They faced ferocious animals, hunger, rough terrain, rain storms and oppressive heat and, worse of all, the constant threat of being recaptured by the patrols that had been sent out looking for them. They became very savvy—asking for food from farmers and then taking off in the wrong direction and then doubling back in case they were reported. They supplemented what food they were given by trapping wild animals and eating whatever bush tuck they could find. Molly had learned how to navigate through the countryside from her father, always keeping an eye on the position of the sun. The girls make it home to their families who, though stunned that they came so far, were very happy to have their daughters back home. The trek across Australia is one of the longest in the recorded history of the country and certainly the longest that was accomplished barefooted.

More summaries and resources for teaching or studying Rabbit-proof Fence.