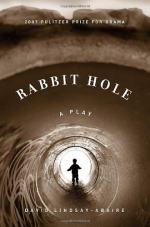 While never featured on stage, Danny is the central character of this drama. There is no escaping his presence; the journeys of each character revolve around his life and death. Danny was four years old when he died. He chased the family dog, Taz, into the street where he was hit by a car driven by Jason Willette. Though the audience never physically sees Danny, his voice is featured in the second scene as Howie rewatches a home movie of them playing with Taz. Danny has a vast imagination, as he pretends to be a superhero with Howie.

Becca, a woman in her late-thirties/early-forties, is the member that ties the rest of the family together. She is the mother of Danny, wife of Howie, sister of Izzy, and daughter of Nat. Becca has a type-A personality and is known for her delicious desserts.