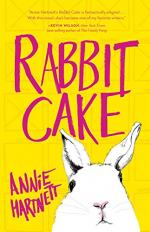 Hartnett, Annie
This Study Guide consists of approximately 57 pages of chapter summaries, quotes, character analysis, themes, and more - everything you need to sharpen your knowledge of Rabbit Cake.

The following version of this book was used to create this study guide: Hartnett, Annie. Rabbit Cake. Tin House Books, 2017.

This novel begins with twelve-year-old narrator Elvis Babbitt recounting her mother’s death. Six months after Elvis’s tenth birthday, her mother, Eva Babbitt, sleepwalked into the Chattahoochee River near their home in Freedom, Alabama. On Elvis’s tenth birthday, her mother burnt her rabbit cake--a family tradition bringing good luck to special occasions and new beginnings--which Elvis considers a bad omen. Elvis recounts her grieving period by marking off months on her grieving chart, which has 20 months. Her school counselor, Ms. Bernstein, tells her that a death generally takes about 18 months to get over, but Elvis has two extra months on her chart because her mother’s body did not surface until two months after her actual death.

During the first six months of the grieving chart, Frank Babbitt, Elvis’s father, cremates his wife. He takes to wearing her lipstick and bathrobe. On the same day her mother gets cremated, Lizzie, Elvis’s fifteen-year-old sister, gets brought home in a police cruiser for punching her best friend, Megan Sax, in the jaw. Elvis does not have many friends to get into fights with and spends most of her time watching Dr. Lillian Stone on the Animal Network. Her best friend is Boomer, the family’s border collie. Elvis shares an interest in animals with her mother, who had a PhD in biology from Auburn University. Elvis remembers these good parts about her mother, but is more uncomfortable about remembering the bad parts, like how she once saw her mother being intimate with Mr.Oakes, Elvis’s former speech teacher. Elvis begins meeting with Ms. Bernstein, the elementary school counselor, and is somewhat reluctant to talk about her feelings or her mother’s death. Having a hard time believing her mother’s death was merely an accident, Elvis begins to investigate the circumstances. Elvis also begins research on her mother’s book, Sleep Habits of Animals and What They Tell Us about Our Own Slumber. Lizzie, who is also a sleepwalker, begins having more serious sleepwalking episodes. Elvis’s father brings home a parrot named Ernest Hemingway that has the exact same voice as Eva. Frank begins taking the bird everywhere with him. Lizzie’s sleepwalking worsens, and Elvis tries desperately to help her sister. She stays up through the night to observe her and researches sleep disorders at the library. Elvis's efforts are moot. One night, Lizzie plucks the feathers off of Ernest Hemingway, infuriating her father. He sends Lizzie to St. Cloud’s Hospital for Women.

During months seven through twelve, Elvis and her father fall into an easy routine of fried chicken takeout and episodes on the Animal Network. Lizzie sends cryptic postcards about Boomer and being in heaven. While researching her mother’s book, Elvis comes to believe that her mother might have had cancer and drowned herself on purpose. A large statue of Jesus made up of ocean debris arrives at the house. After having a vision during meditation, Eva commissioned the statue from a student named Soda. Lizzie arrives back from the hospital. She is uncharacteristically obsequious and catatonic. Elvis begins to volunteer at the Serengeti Park Zoo, an activity she greatly enjoys. The only thing she does not enjoy about it is having to kill the rodents, who over-breed. Lizzie’s roommate from the hospital, Vanessa, begins to stay with the Babbitt family. Vanessa tells Elvis that Lizzie is overmedicated. Vanessa moves out of the Babbitt house after making inappropriate advances towards Frank. At the zoo, Harrison the giraffe dies. Elvis throws herself on Harrison’s body when a couple of zoo workers take chainsaws to his body in order to make it more manageable to remove. Zoo management asks Elvis to take a few weeks off from volunteering. During her time off, Elvis helps Lizzie bake rabbit cakes. Lizzie hopes to make a thousand and enter the record into the Guinness Book of World Records. Lizzie and Elvis spend an afternoon with Soda after he convinces them to give back the Ocean Jesus statue, so he can put it in an art show. That afternoon, Soda gets arrested for marijuana possession and put in jail.

During months thirteen through seventeen, Lizzie runs away with Soda after he gets out of jail. Frank refuses to call the police, considering Lizzie’s past transgressions. Elvis calls Miss Ida, her mother’s former psychic. Miss Ida tells her that Lizzie will be home in a few months, by September. Elvis returns to her volunteering at the zoo. She worries Lizzie's disappearance will require a whole new grieving chart. She also discovers that her mom was having an affair with Mr. Debbie, the pet store owner, which is why Ernest has Eva’s voice. Elvis reconnects with Vanessa and they try to get Lizzie home by threatening Soda with statutory rape charges. This does not work, but Lizzie returns home by September. Soda broke up with her because of her sleepwalking episodes. After a particularly aggressive sleepwalking episode during a family excursion to South Carolina, Frank lets Lizzie focus on her baking, which seems to help her keep a moderating routine. Frank also announces that he has met someone on the internet and she will be coming to visit soon.

During months 18 through 20, Samantha, Frank’s new girlfriend, comes to visit. She has a nut allergy, and Lizzie knowingly feeds her a marzipan cake. Lizzie confesses to Elvis that she remembers the night their mother died. Lizzie was sleepwalking and would not let Boomer out, even though he was scratching at the front door. This makes Lizzie feel partly responsible for her mother’s death. In attempt to thank Elvis for her help, Lizzie breaks into the zoo to release the rodents. She gets caught, and Elvis is fired from the zoo as a result. Elvis forgives her sister after learning why she broke-in in the first place. She also gives up investigating her mother’s death. After Boomer dies, Elvis realizes that death will always feel inexplicable.

More summaries and resources for teaching or studying Rabbit Cake.