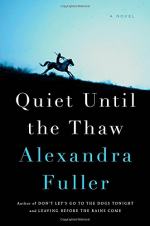 Plot Summary
+Chapters Summary and Analysis
Part 1, Quiet Until the Thaw – Thanatopsis
Part 1, You Choose on Turtle Island – Thaté, Yet Again
Part 1, Italians/Indians Cry Too – The Old Buffalo Bull, Again
Part 1, Rick Overlooking Horse and the Ugly Red Stud – Nepotism, Just Between Family and Friends
Part 1, A Warning – You Choose Watson’s Very Vigorous Rage
Part 2, The Great Fertility Crisis of Le-a Brings Plenty – The Easiest Way to Find a Warrior on the Rez
Part 2, Le-a’s Other Men, and One Woman – Tray Tor and Squanto Are in Charge of Two Very Small Babies for Less Than Three Hours
Part 3 – The Ugly Red Stud, at Last – How Turtle Island Got Its Name
Part 3, You Choose What Son, Out of the Second Rez – You Choose Watson, Indian Activist
Part 3, Daniel and Jerusalem (Don’t) Win a Thousand Dollars – The End
Free Quiz
Characters
Symbols and Symbolism
Settings
Themes and Motifs
Styles
Quotes
Order our Quiet Until the Thaw Study Guide

Fuller, Alexandra
This Study Guide consists of approximately 46 pages of chapter summaries, quotes, character analysis, themes, and more - everything you need to sharpen your knowledge of Quiet Until the Thaw.

Quiet Until the Thaw Summary & Study Guide includes comprehensive information and analysis to help you understand the book. This study guide contains the following sections:

This detailed literature summary also contains Quotes and a Free Quiz on Quiet Until the Thaw by Fuller, Alexandra.

The following version of this book was used to create the guide: Fuller, Alexandra. Quiet Until the Thaw. Penguin Press, 2017.

Mina Overlooking Horse unwillingly acquired two newborn children in the winter of 1944. The first was You Choose Watson, the son of an Oglala Lakota woman and a white Cowboy; the second was Rick Overlooking Horse, her biological grandchild. The boys grew together until Rick Overlooking Horse was sent to Vietnam. There, he sustained an injury that took his vision in one eye and burned is face. While he healed, his spirituality grew, and he was sent back to Pine Ridge Indian Reservation on the Oglala Lakota Native American Reserve in South Dakota upon recovery. He found a teepee on a secluded piece of land, started a garden, kept Indian war ponies and wild buffalo, and fostered a relationship with the natural world.

Meanwhile, You Choose Watson conned his way out of being drafted for the Vietnam War and moved to Canada with other Native Americans off government reserved land. He enjoyed only skimming the surface of stereotypical North American spirituality. In contrast, Rick Overlooking Horse became an unofficial medicine man of the reservation, providing Wahupta, or marijuana, solitude, and the natural world to heal those who sought it. You Choose Watson returned to the reservation looking for wisdom and guidance, but responded to Rick Overlooking Horse’s method of healing with fear.

Using his newfound popularity with fellow Lakota who do not connect with the culture to his advantage, You Choose Watson ran for tribal chairman and won. He abused this power, and because of his unwillingness to create positive change for Pine Ridge Indian Reservation, infrastructure, education, and peace amongst neighbors fell apart. In response to these events, Rick Overlooking Horse gained a following at Wounded Knee to practice a peaceful movement for the termination of You Choose Watson as chairman, treaty negotiations with the U.S. government, and the return of Hé Sapa, the Black Hills, to the Oglala Lakota people. After many lives were lost, Rick Overlooking Horse and the other Elders decided to call a truce. Following the protest, You Choose Watson threatened Rick Overlooking Horse, then shot a gun into the reservation Church and liquor store. His actions earned him 10 years in prison, but his minority status afforded him 30 extra years for crimes he did not commit.

The focus shifts to Le-a Brings Plenty and her significant other, Squanto, who also lived on the reservation. Both were deeply invested in their culture and averse to the one imposed upon them. While working as a security guard at the Lakota Oglala Sioux Tribal Hospital, Squanto witnessed the birth of twins, Jerusalem and Daniel, by the lost and impaired Mona Respects Nothing. She escaped the hospital with Squanto’s car and was found dead in an accident shortly after. Her newborn twins were on the brink of death, so Squanto and a friend, Tray Tor Two Bulls, flee with them to hide them from the government. They arrived with the babies at Rick Overlooking Horse’s lean-to, where he nursed them back to health. Le-a immediately accepted them as her own children, and the boys were raised in the Oglala Lakota tradition by the loving Rick Overlooking Horse, Le-a, and Squanto.

When You Choose Watson was released, he illegally purchased a gun and used it to murder Rick Overlooking Horse with seven bullet wounds. He was begrudgingly taken in by Le-a and Squanto, and despite converting and becoming a Native American activist, never fully assimilated. Once the boys turn 18 and personally experience oppression, they wished to be productive off the reservation and took a job as “two real Indian boys for Buffalo Bill’s Wild West Show” with Disneyland France (252). After earning money at the expense of their dignity, Jerusalem cut off their ponytails required for their show, severing their contract. The novel ends with Jerusalem remembering an aphorism shared with them by Rick Overlooking Horse, assuring them that everything will be alright in the end; it simply is not the end, and it will not arrive for a very long time.

More summaries and resources for teaching or studying Quiet Until the Thaw.

Quiet Until the Thaw from BookRags. (c)2022 BookRags, Inc. All rights reserved.