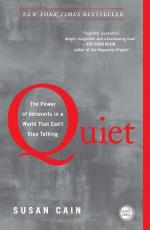 Quiet: The Power of Introverts in a World That Can't Stop Talking Summary & Study Guide

Susan Cain
This Study Guide consists of approximately 57 pages of chapter summaries, quotes, character analysis, themes, and more - everything you need to sharpen your knowledge of Quiet.

Quiet: The Power of Introverts in a World That Can't Stop Talking Summary & Study Guide Description

Quiet: The Power of Introverts in a World That Can't Stop Talking Summary & Study Guide includes comprehensive information and analysis to help you understand the book. This study guide contains the following sections:

This detailed literature summary also contains Topics for Discussion on Quiet: The Power of Introverts in a World That Can't Stop Talking by Susan Cain.

The following version of this book was used to create the guide: Cain, Susan. Quiet: The Power of Introverts. Broadway Books, 2013.

Cain begins her narrative with the compelling story of Rosa Parks, who launched the Civil Rights movement with the power of one quietly spoken word--"no"--when a white bus driver asked her to give up her seat on a segregated Montgomery, Alabama bus in 1955. Cain uses Parks to embody the quiet reserves of strengths that characterize introverts. However, according to Cain, the U.S. has been plagued by what she calls the "extrovert ideal" since around the beginning of the 20th century. She writes that extroverts, who seek their stimulation from the outside world, have been regarded more highly in a culture in which movement and urbanization required fast associations and the ability to sell oneself. The author cites the rise of Dale Carnegie, a poor son of pig farmers in Missouri, as an example of the newfound belief in the Cult of Personality over the previous Cult of Character. The talent to talk became the most important way to get ahead.

Cain asks whether nature or nurture leads people to become introverts, seeking their excitement from inner resources, and she journeys to the lab of Harvard developmental psychology professor Jerome Kagan to find her answer. There, Kagan tells her about his research, which has shown that some babies are more to be more reactive to external stimuli. These babies tend to grow up into people who are more cautious and inner-directed--classic introverts. Even as adults, their amygdalae--the part of their brain that takes in information and sends it to other parts of the brain--is more reactive to novelty and to what is unknown. Cain cites studies that show that these sensitive people are more reactive to both bad and good parenting as children, a theory known as the Orchid Hypothesis. Introverted children are like orchids who can even thrive or suffer, depending on whether they have supportive or unsupportive upbringings.

The author describes the perils of relying only on extroverts. She travels to Harvard Business School and to the Saddleback Church, a large evangelical church in California. In both places, she finds that introverts, despite their good ideas and cautious attention to detail, are drowned out in a sea of extroverts. The church even conveys that God was an extrovert. The author believes that the 2008 financial crisis in banking was, however, in part a result of having too many extroverts at the table. Such situations tend to lead to what she calls groupthink and to blocking out good ideas, as well as to privileging risk taking over caution.

In search of a culture that prizes introversion, the author goes to Cupertino, California, where the high school is 77% Asia. There, top students are prized, and scholarly, quiet people are lionized. However, when people leave that culture, which has more of the Asian emphasis on introversion, they tend not to advance. There is even a school for adults near Cupertino that teaches people to be more assertive to get ahead in business. The author includes several case studies of introverts who have been quite forceful, including Eleanor Roosevelt and Gandhi, by following introverted tenets of compromise, caution, and conscience.

The author concludes her book with several chapters that provide advice to introverts. She writes that people can change their personality for short periods of time, following the Rubber Band Theory that states that people can stretch their personalities but always return to their core selves. It is particularly compelling for introverts to act extroverted in the service of meaningful pet projects. However, they have to give themselves time to restore themselves and return to form. She also provides advice about how extroverts and introverts, who often can form meaningful partnerships in love and work, can communicate better and how the parents and teachers of introverts can raise them in ways that respect their ways of being and encourage their talents.

More summaries and resources for teaching or studying Quiet: The Power of Introverts in a World That Can't Stop Talking.

Quiet: The Power of Introverts in a World That Can't Stop Talking from BookRags. (c)2022 BookRags, Inc. All rights reserved.