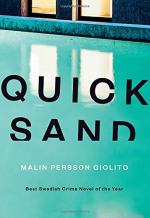 Malin Persson Giolito
This Study Guide consists of approximately 56 pages of chapter summaries, quotes, character analysis, themes, and more - everything you need to sharpen your knowledge of Quicksand.

The following version of this book was used to create this study guide: Malin Persson Giolito, Quicksand. Trans. Rachel Willson-Broyles. Other Press, 2017.

Maja Norberg, a precocious 18-year-old, gets swept into the chaos surrounding her classmate Sebastian Fagerman, the son of the richest man in Sweden. When Sebastian shows an interest in Maja, her parents are overjoyed. Claes Fagerman, Sebastian's father, invites the family, who are touring Europe, to dine on his luxurious yacht in Nice, Italy, and entertains them with no expense spared. When Sebastian invites Maja to sail the Mediterranean with him for two weeks before school starts, her parents readily give their permission. After the two return to Stockholm and school starts, Sebastian attends school in Maja's class because he is repeating the last year of upper (secondary) school.

Less than a year later on one of the last days of the school year, Maja's homeroom class meets to plan a performance for the end of the year assembly. Instead, a school shooting takes place in which Sebastian dies and only Maja survives with no injuries. The police take Maja into custody and charge her with mass murder. The plot weaves Maja's introspection with several thematic threads: the police investigation; the courtroom trial; parenting and child abuse; financial inequities; and gender discrimination. Her rumination unintentionally produces a scathing critique of Swedish society, but renewed faith in the workings of Sweden's legal system.

Maja's narrative, told entirely in first person, examines the events and perceptions that led to the disaster. Maja's record of her journey to adulthood and maturity creates a moving courtroom trial and an exciting crime novel. Her sharp, critical eye uncovers deep social issues that can occur in any advanced society. The trial pits a prosecutor going through the motions against a brilliant defense attorney who says this is his last and most important case which he must win to save Maja.

More summaries and resources for teaching or studying Quicksand.