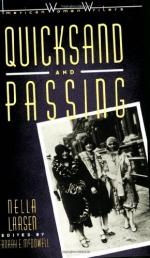 Quicksand and Passing Topics for Discussion

Is Nella Larson attempting to admonish or warn her readers about inter-racial marriage through Helga Crane in Quicksand, and/or through Clare Kendry? What is the thrust of her message?

List some of the cultural markers in the story which reveal that Quicksand was written in the 1920s. How have these changed?

Is Helga Crane's biggest problem simply the fact that she is of mixed races, or is there a deeper problem that plagues her? If so, discuss what that might be and find examples.

What is the author's purpose in ending the story without telling us Helga Crane's next move?

Helga Crane seems luckier than many African Americans, but her life is still plagued by racism. What are the instances of racism that influence and hurt Helga?

What are some other meanings for the term "passing" with respect to Larson's characters? Are they...