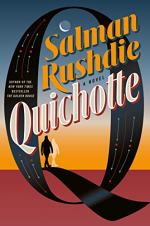 Salman Rushdie
This Study Guide consists of approximately 44 pages of chapter summaries, quotes, character analysis, themes, and more - everything you need to sharpen your knowledge of Quichotte.

This detailed literature summary also contains Quotes and a Free Quiz on Quichotte by Salman Rushdie.

The following version of this book was used to create this study guide: Rushdie, Salman. Quichotte. New York: Random House, 2019.

The novel opens in the present-day United States. Ismail Smile is a traveling salesman for a large pharmaceutical company. He is about 70 years old. The company—Smile Pharmaceuticals, Inc.—is owned by Ismail’s cousin, Dr. R. K. Smile. One day, Ismail falls in love with famous television personality Miss Salma R. Like Ismail, Salma is originally from India. Ismail decides to change his name to Quichotte (after literary figure Don Quixote) and go on a quest to win Salma’s love. Quichotte believes that his quest is divinely ordained. As he begins his quest by driving on the country’s highways, he wishes on a shooting start that he had a son. Suddenly, a spectral young man appears in the passenger seat. Quichotte names the figure Sancho and believes that he is Quichotte’s son, granted by some divine power.

The narration then states that Quichotte’s story is a fictional narrative, specifically a novel. The novel is being written by a man whom the narration refers to only as Brother. Brother is the author of spy novels, none of which have been very successful. He has decided to write a novel that is quite different from his past works, specifically the story of this character Quichotte. Brother and Quichotte share many traits, such as the fact that they both live in America and are originally from India. The narration then shifts focus to the character of Salma R. She is the daughter of a successful Bollywood actress. Salma came to American in her twenties to star in a successful television show. She is now a successful TV producer, as well as the host of a popular daytime talk show.

The narration then shifts focus to Brother’s sister, whom the narration refers to only as Sister. Like brother, she is originally from India. She now lives in England and was elected to parliament, becoming the first non-white woman to do so. The narrative then shifts focus to Dr. R. K. Smile, Quichotte’s cousin. Dr. Smile is very wealthy due to the success of his pharmaceutical company. Much like the real-life Sackler family, Dr. Smile has used illegal and immoral practices in order to sell large amounts of highly addictive opioid medications. The story then returns focus to Quicotte and Sancho. Despite being born, in part, out of Quichotte’s consciousness, Sancho has his own will, personality, and consciousness. Sancho wishes to be a corporeal person and lead a normal life. Suddenly, some divine force turns Sancho into a corporeal person. Sancho does not wish to accompany Quichotte but he feels bound to Quichotte by some metaphysical force.

Instead of driving straight to New York City, where Salma lives, Quichotte takes a much more meandering path, as he says that he must follow spiritual signs and undergo spiritual tasks. Along the way, Quichotte and Sancho experience racist abuse from white strangers. In Kansas, Sancho meets and falls in love with a woman, and he vows to return to win her love. Meanwhile, the narration gives firther background information about Salma, revealing that she has bipolar disorder, is addicted to opioids, and was sexually molested by her grandfather when she was a child. Quichotte and Sancho eventually arrive in New York City, and Quichotte declares that he must contact his estranged sister and reconcile with her. Quichotte refers to his sister by her nickname, the Human Trampoline (HT for short.)

The narrative then shifts focus to Brother. Like Quichotte, Brother also has a son and a sister. (The narration refers to them only as Son and Sister.) He is estranged from both of them, and he decides to reconnect with them. He discovers that Son has recently been arrested for computer hacking, but Brother is allowed to visit Son in custody. Meanwhile, Sister has recently been diagnosed with terminal cancer, so Brother travels to her home in London to see her. Sister soon kills herself by overdoing on opioids, in order to avoid a painful, protracted death. Brother grieves for his sister and returns to America to finish writing his book.

Quichotte reconciles with his sister and begins planning his meeting with Salma. However, Sancho then flees to Kansas to see the woman he loves. Unfortunately, Sancho is still metaphysically connected to Quichotte, and after he arrives in Kansas, he permanently disappears due to the distance between himself and Quichotte. By the time Quichotte finally meets Salma, cataclysmic weather events begin to occur all voer the world, and it appears that the world will soon end. Quichotte and Salma flee to California, as there is a company there who has built a prototype portal machine. Quichotte and Salma use the machine to try to escape to a parallel Earth in a parallel dimension. Unfortunately, the atmosphere of the parallel Earth is uninhabitable to them, and they die.

More summaries and resources for teaching or studying Quichotte.