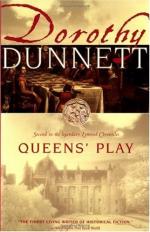 Plot Summary
+Chapters Summary and Analysis
Part One: The Vulgar Lyre: The Fork is Chosen, I: Silent in the Boat, II: Dieppe: The Pitfalls and the Deer
Part One: The Vulgar Lyre: III: Rouen: The Nut Without Fruit and IV: Rouen: Fine, Scientific Workings Without Warning
Part One: The Vulgar Lyre: V: Rouen: Fast Drivings for the Purpose of Killing and VI: Rouen: The Difficult and the Impossible
Part Two: Dangerous Juggles: I: Rouen to St. Germain: The Inexpugnable Drone and I: Blois: Red Tracks in the Wood
Part Two: Dangerous Juggles: III: Aubigny: Boldness of Denial and IV: Blois: All the Mean Arts
Part Two: Dangerous Juggles: V: Blois: Wickedness is the Rule and VI: Blois: The Forfeited Feast
Part Three: London: The Excitement of Being Hunted: I: Blois: The Mill in Motion and II: Amboise: An Accident Happens
Part Three: London: The Excitement of Being Hunted: III: Blois: Distress is Not Released and IV: London: Wolves All Around Him
Part Three: London: The Excitement of Being Hunted: V: London: The Intentional Betrayal, VI: The Nettle and the Venom, and VII: Pledge to Fasting
Part Four: The Loan and the Limit: I: Dieppe: Illegal After Screaming and II: Angers: Boarshead and Apple
Part Four: The Loan and the Limit: III: Chateaubriant: A Bed-Tick Full of Harpstrings and IV: The Price of Satire
Part Four: The Loan and the Limit: V: Chateaubriant: Proof, Without Love or Hatred and VI: Satin and Scarlet
Free Quiz
Characters
Objects/Places
Themes
Style
Quotes
Topics for Discussion
Order our Queens' Play Study Guide

Dorothy Dunnett
This Study Guide consists of approximately 44 pages of chapter summaries, quotes, character analysis, themes, and more - everything you need to sharpen your knowledge of Queens' Play.

This detailed literature summary also contains Topics for Discussion and a Free Quiz on Queens' Play by Dorothy Dunnett.

This book leads the reader on an adventurous journey through sixteenth century France as Sir Francis Crawford of Lymond and others protect the young Mary Queen of Scots from her would-be assassins while simultaneously trying to capture these killers. The story blends history with fiction in a way that makes it nearly impossible to tell the difference between the real and the fictitious.

The book begins with a list of characters and their connections to each other. This, along with the map of France and part of England, gives the reader a sense of what to expect from this novel. It many be a work of fiction, but it is filled with historically accurate information.

The story begins as O'LiamRoe, an Irish prince, is on a ship bound for France. He wants to learn all he can about being a royal while living this fine life at the expense of the French court. He brings along his ollave Thady Boy Ballagh. Before the chapter ends, the ship is almost sunk by another ship, paid to destroy them. Thus begins this exciting and action-packed historical fiction novel.

Within a few chapters, the reader learns that Thady Boy is actually Sir Francis Crawford of Lymond and has come to France to protect the young Queen of Scots and the future wife of the French Dauphin. Mary of Guise, the Queen Mother, knows that her child's life most likely is in danger due to the tension and hatred connecting members of the Scottish and French courts, as well as others. Her instincts are quite correct.

Lymond spends the rest of the book protecting Mary, while trying to apprehend and convict her would-be assassins. He, along with other characters in this book, risk their lives for the sake of Mary's, while several others risk their lives to end Mary's.

As the author tells the tale of the saving of Queen Mary, she also gives much insight into what life in the sixteenth century might have been like, filled with beautiful French towns, spoiled royalty, and deception and intrigue around every corner. She spends a significant amount of time describing the weary towns as the French court parades through, as well as the many other disturbances caused by the spoiled aristocracy. Dunnett, like a skilled sports announcer, also gives detailed descriptions of all the action that takes place in this story, most notably the fights and sporting events in which Lymond participates.

The book comes to a close as a treaty is signed between France and England, Mary's would-be killers are removed of their power to kill her, and Lymond's job has finally come to an end. Mary's life is safe, but the book leads the reader to wonder what lays in store for Mary, Lymond, and the other people of sixteenth century Europe.

More summaries and resources for teaching or studying Queens' Play.