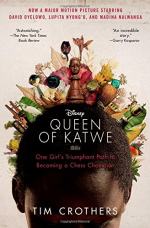 This detailed literature summary also contains Topics for Discussion on Queen of Katwe by Tim Crothers.

In the prologue, Fourteen-year-old Phiona Mutesi travels across the world from her home in the slum of Katwe, Uganda, to compete in the international chess Olympiad in Russia. Faced with culture shock and far more experienced players, Phiona is devastated after losing her first two games.

Chapter One introduces Katwe, a slum outside of Kampala which attracted its first impoverished residents in the early 1970s. After years of civil war and economic instability, Katwe grows into a sprawling slum where sewage runs through the streets. Harriet Nakku is a single mother trapped in a cycle of poverty. Uneducated and indebted, she struggles to provide for her children.

Robert Katende also grew up very poor but found a path to education through soccer scholarships. After a sports injury nearly cost him his life, Katende became a born-again Christian. After university, he began working for Sports Outreach, an American organization that seeks to provide support and religious ministry to the children living in Uganda’s slums. After discovering that some children didn’t want to play sports, Katende decided to engage them in another way: by teaching them to play chess.

Through his chess project, Katende offers a daily meal of porridge to the children along with spiritual lessons. One day, a young girl named Phiona follows her brother to the project and begins to play.

Phiona only knows life in the slum and has almost no education since her mother Harriet can’t afford the school fees. As a child, she is nearly killed twice by illness, but survives. Fighting for survival in the slum has made Phiona an aggressive child. But, as she begins to learn patience and calm through the game of chess, her personality softens.

In Chapter Six, readers learn that Sports Outreach was founded by an American man named Russ Carr. Carr also overcame personal challenges and a difficult background through the combination of sports and religion. By the time Katende’s chess project begins, Carr is elderly and Sports Outreach is run by another American man named Rodney Suddith. Suddith overcame his own working class background through athletic scholarships and believes in the combination of sports and ministry. Not long after Phiona joins the chess project, Sports Outreach is able to fund the education of dozens of Ugandan children through the Andrew Popp Memorial Scholarship. Andrew Popp was an American teenager who also had a passion for sports, religion, and helping children. After he committed suicide in his senior year of college, his parents teamed up with Sports Outreach to create the scholarship in his name. Phiona is finally able to go to school.

Katende decides it is time for his chess students to have a goal and begins entering them in tournaments. Before long, Phiona emerges as one of the best players in the group and becomes the female champion at the Under-20 national championship. Katende realizes her potential and begins to train her more seriously. Phiona wins the national junior championship in 2008 and again in 2009.

In 2009, Phiona and two of her teammates travel to Sudan and win Africa’s International Children’s Chess Tournament. For the first time, Phiona sees what life is like outside the slums. She resolves to work hard at improving her chess game so she may have access to that outside world and its opportunities. Next, Phiona participates in a national tournament with adults and qualifies for the International Chess Olympiad in Russia.

Faced with older and far more experienced players, Phiona suffers many defeats at the Olympiad. After her initial devastation, she sees it as an opportunity to learn. Her competitors recognize her talent and Phiona hopes to one day become a chess Grandmaster.

After the Olympiad, Phiona competes in another Ugandan national tournament and wins, cementing her title as the best female chess player in the country. Phiona continues to mature as both a person and a chess player. She credits much of her success and survival to being a born-again Christian.

Phiona begins teaching chess to other children and international publicity begins to bring attention to her story and to Katende’s chess project. Phiona attends secondary school thanks to the Popp scholarship but her life is still full of struggles. Her family still lives in the slum and she is at risk of falling into the traps of young single motherhood like her elder sister Night. She must resist the cultural pressure to become a mother as well as the financial pressure of finding a man to support her, which may put an end to her education and chess career.

At the end of the book, Phiona’s future is uncertain. Her skill at chess continues to develop and her mentors hope she will overcome the challenges of her background and build a life outside the slum. They hope that, by doing so, other children will be inspired to follow in Phiona’s footsteps.