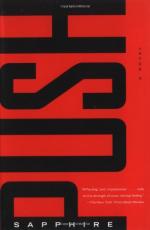 Sapphire (author)
This Study Guide consists of approximately 35 pages of chapter summaries, quotes, character analysis, themes, and more - everything you need to sharpen your knowledge of Push.

This detailed literature summary also contains Topics for Discussion and a Free Quiz on Push by Sapphire (author).

Push is an emotionally powerful, disturbing novel written from the perspective of a young and poor black woman whose life has been defined by sexual, emotional, and physical abuse. Precious Jones lives in Harlem, New York with her mother, who is an overweight shut-in. Precious's mother beats her and sexually molests her.

Her father is a rotating figure in her life. He does not live with the family and only stops by when he wants to have sex with Precious. He starts having sex with Precious when she is three. Her mother is right next to them the first time he has sex with Precious. She does not do anything about it. At age twelve, Precious has her first child. Four years later she has another, which gets her suspended from school. Her dad is the father of both of her children.

Precious's mom does not want her to continue her education at a special school. She wants Precious to stay home, take care of her, and follow her footsteps into a life of despair supported by public aid. Precious wants more. She starts going to the school and eventually learns to read. The school is an all girls school that caters to young, troubled women. Precious is one of seven girls who are in the school. None of the girls have basic math, reading, or writing skills. These young women are also extremely affected by horrendous life experiences that include rape, incest, molestation, physical abuse, drug use, and prostitution.

As soon as Precious starts at the new school, she changes. She starts speaking out in class and she participates in activities. She also starts to process what has happened to her. As she faces her demons, she tries to understand why she was abused and why her mother did nothing to stop it.

The school and Precious's teacher, Ms. Rain, lead Precious to a self-awakening in which she sees herself as something other than ugly, black filth. Precious wants to change her life and in many ways she does. She vows not to remain on public aid like her mother. She also vows to take better care of her son, Abdul. She follows through on this promise, despite seemingly insurmountable challenges.

Precious and the other girls find themselves in situations they did nothing to create. Unfortunately, there is not a whole lot they can do to change them. They use each other as a support system try to heal wounds created for them by others.

More summaries and resources for teaching or studying Push.