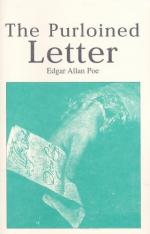 The hallmark of "The Purloined Letter" is its use of abstract logic by C. Auguste Dupin. The story is one of what Poe called his "tales of ratiocination," which employed reason—rather than horror, as in many other Poe stories—as a narrative tool. Dupin, who also solves the cases in some of Poe's other tales of ratiocination, is a detective who uses deductive reasoning to solve the case of the stolen letter.

As Dupin explains to the narrator, he knows, both from recent conversations with the Prefect and...