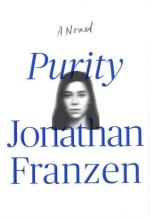 This detailed literature summary also contains Quotes and a Free Quiz on Purity by Jonathan Franzen.

“Purity” is a contemporary novel of discovery and cultural commentary by Jonathan Franzen in which Purity “Pip” Tyler goes to work for the information leak organization Sunlight Project while seeking to learn the identity of her father. When the novel begins, Pip has $130,000 in student debt, is stuck in a dead-end job, and struggles to retain a relationship with her imbalanced mother. Pip spends much of her free time protesting nuclear weapons, while she is in love with her married housemate and fellow protestor, Stephen. A German couple, Annagret and Martin, come to meet Pip through their travels as they seek to network with anti-nuclear groups. Annagret explains she is a friend of Andreas Wolf, the famous and wanted founder and leader of the Sunlight Project, who now operates out of Bolivia. Annagret is impressed with Pip, and wants her to go to work for Sunlight. When Stephen’s wife leaves him, and when Stephen rejects the much younger Pip’s advances, Pip agrees to work for Sunlight.

The novel then jumps back several decades to the 1980s, where Andreas Wolf, living in East Germany, is in his late twenties. Serving a work sentence for publishing a poem that was critical of socialism, Andreas tends to juvenile delinquents under the assumption he is to put them back on the right path. Andreas takes his work lightly, sleeping with dozens of teenage girls who come to him instead. Eventually, he meets Annagret, who, at 15, changes his lifestyle for the better. He senses a goodness in her, falls in love with her, and murders her sexually-abusive stepfather for her. As the Communists collapse in Germany, Andreas finds himself in front of camera where he proclaims that the secrets and lies of the past must be exposed by the sunlight. This makes him an overnight celebrity, and positions him for his future work. Andreas later meets an American named Tom Aberant, whom he befriends and confesses the murder to.

Tom and Andreas become friends due to their difficult lives. Tom is dealing with an emotionally imbalanced wife named Anabel, heir to a massive agribusiness fortune that she does not want. Tom has come to Germany with his dying mother so she can see her homeland one last time, and so he can write an article about the fall of Communism for Harper’s. Tom’s mother passes away. Tom helps Andreas to rebury the man Andreas has killed to avoid detection in exchange for Andreas’s help in gaining access to the German State Security archives. Both men fall out of touch for several years, during which time they commit to their own efforts in pursuit of truth. Andreas’s relationship with Annagret falls apart as he works on Sunlight, while Tom begins an investigate journalism website called Denver Independent. As a measure of thanks and apology, Andreas sends some leaked information Tom’s way, so that Tom might utilize it in his work. Tom and Anabel later divorce, while Tom begins seeing a woman who comes to work for him as a reporter, Leila Helou.

When Leila criticizes Andreas Wolf and other leakers as irresponsible children with no filter, and people with secrets of their own, Andreas panics and believes Tom is going to divulge the past. Andreas uses his organization to pick apart Tom’s past, tracking down Anabel to discover she is the mother of Pip, and Tom is Pip’s father. This, in turn, leads to Andreas using Annagret to hire Pip. Andreas then uses Pip as a plant at Denver Independent to install spyware so Tom can be spied on. Pip has a moral awakening when she comes to assume Tom is her father, and she confesses everything.

Tom travels to Bolivia to confront Andreas, who has by now become psychotic, paranoid, and suicidal. He urges Tom to kill him for everything he has done, but Tom will not do so. Andreas then e-mails Pip Tom’s secret memoir, obtained using the spyware, which reveals the broad extent of the past. Andreas then scrawls a murder confession on his arm and jumps off a mountain summit to his death. Tom then returns to Colorado, where he and Pip establish a relationship. Pip reads the memoir, and comes to the conclusion that some secrets are better left untold, and that sometimes the past is best left in the past. Pip then reestablishes contact with her mother, and reunites her parents who accuse one another of misrepresenting their roles in the past. Pip, now seeing a young man named Jason, hopes the future will be better.