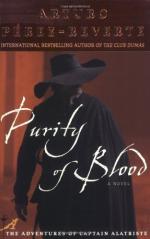 Arturo Pérez-Reverte
This Study Guide consists of approximately 34 pages of chapter summaries, quotes, character analysis, themes, and more - everything you need to sharpen your knowledge of Purity of Blood.

This detailed literature summary also contains Topics for Discussion and a Free Quiz on Purity of Blood by Arturo Pérez-Reverte.

A woman is found strangled outside the church of San Gines, and Captain Alatriste, in doing a favor for his friend, the poet Francisco de Quevedo, quickly becomes embroiled in a tangled net of political intrigue. When the Inquisition, working with Alatriste's enemy the royal secretary Luis de Alquezar, attempts to bring down both the Conde de Olivares and Alatriste himself by prosecuting Alatriste's young squire Inigo for heresy, the captain and his friend don Quevedo must race against the clock to clear the boy's name and avert an appointment with the stake.

Chief Constable of Madrid Martin Saldana is called to investigate the discovery of the body of a woman found strangled in front of the church of San Gines. Days later, Captain Alatriste, hired sword and ex-soldier, is approached by his friend, the flamboyant and irascible aristocratic poet, Francisco de Quevedo, to take a job assisting in the rescue of a young woman named Elvira de la Cruz from the convent of Adoratrices Benitas. Vincente de la Cruz, the girl's father, insisted that his daughter and the rest of the nuns are being mistreated by the priests Fray Coroado and Fray Garzo. He has tried diplomatic channels, but both of the priests are well connected, and de la Cruz, whom the Church suspects of having non-Christian blood in his family tree, does not have the leverage to get his daughter out of the situation.

Alatriste and don Quevedo help Vincente de la Cruz and his two sons sneak into the convent, but they are immediately ambushed by forces of the Inquisition, which has been having the de la Cruzes followed. Vicente and his younger son are killed while the elder son, Alatriste, and don Quevedo successfully flee the scene. Alatriste's young squire, Inigo Balboa, the narrator of the story, attempts to return to the scene and help his master and is caught by the Inquisition forces led by Alatriste's nemesis, the evil Italian assassin Gualterio Malatesta.

The Inquisition tries to induce Inigo to incriminate Alatriste, but the boy staunchly denies any involvement or knowledge of the affair. Finally, a broken Elvira de la Cruz is made to falsely testify that she knows Inigo and that he practices Jewish rites.

While don Quevedo races north to find proof of this with which to blackmail Alquezar, Alatriste goes to the auto-da-fe held by the Inquisition to publicly sentence Inigo and Elvira. There he is recognized in the crowd by Alquezar, who sets a group of men led by Gualterio Malatesta after Alatriste. Alatriste and Malatesta duel in a nearby alley and Malatesta is seriously wounded, but Alatriste must flee before finishing off his rival because of the arrival of more adversaries.

Don Quevedo arrives at the auto-da-fe just in time to present the proof of impure blood to the royal secretary Alquezar, who, fearing the loss of his post, calls for Inigo's release.

More summaries and resources for teaching or studying Purity of Blood.