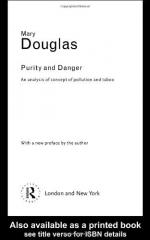 Purity and Danger: An Analysis of Concepts of Pollution and Taboo - Chapter 10 Summary & Analysis

Cultures have their own concepts of what is dirty, as positive structural notions need to be acknowledged. Dirt has both destructive and creative powers, although dirt is treated as bad and excluded from various rituals, such as Israeli rejection of blood that could only be part of sacrifices.

The Oyo Yoruba tribe distinguishes between the use of right and left hand, where preference is given to the right hand. Although incest is regarded as pollution among the Bushong, their king practices it as part of sacrifice. These contradictions involve the very nature of dirt with incomplete identity that presents danger before losing such identity. With absent identity, dirt is not dangerous as its place of belonging is defined. Formlessness is part of decay while it is also part of growth.

When changing and losing the form, the margins are broken due...