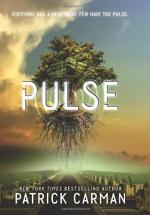 Patrick Carman
This Study Guide consists of approximately 34 pages of chapter summaries, quotes, character analysis, themes, and more - everything you need to sharpen your knowledge of Pulse.

This detailed literature summary also contains Quotes and a Free Quiz on Pulse by Patrick Carman.

Patrick Carman’s dystopian young adult novel “Pulse” takes place in the year 2051, where the world has been ravaged by global warming, and millions are dead. Nations have reverted vast portions of their landmass to wilderness, bottling people up inside massive, sprawling cities called States. In the United States, two massive States exist –the Eastern State and the Western State. While most of the population lives in either of these two States, many live beyond the borders, out in the ruins of old towns and in the wilderness. Some are people who just aren’t ready to go the States; others are rebels; others are those trying to make a go of it on their own.

Sixteen year-old Faith Daniels, her best friend, Liz Brinn, and their families live about a hundred miles from the Western State. Faith is a tall, pretty girl, who has little interest in history, but an unabashed love of music, art, and boys. In their new school, Faith and Liz meet Hawk, a brilliant hacker, and Wade and Clara Quinn, twins who are popular and athletic. They are training for the yearly Field Games, and aren’t nice at all. Faith also meets Dylan, a boy her age who keeps to himself.

It turns out that Faith is an Intel with a pulse, giving her telekinetic abilities, the descendent of an utterly brilliant man named Hotspur Chance who first concocted the idea of States. Chance was a telekinetic individual, who could move things with his mind. He discovered eleven others like him, whom he ultimately killed, going on to bind his own DNA to many other victims –the grandparents of Faith, Hawk, and Dylan, who are Drifters. Wade and Clara are part of a plot to destroy the State system, to return the world to the way it was before, and the Drifters are a force that is determined to stop them. Faith becomes a part of this struggle, going head-to-head with Clara, who also is a descendent of Chance. Dylan and Faith work together to subdue the twins temporarily, allowing the Drifters to escape to Valencia, California, where Faith discovers her second pulse –which acts as a defensive shield of sorts, protecting her against harm. Faith also comes to fall in love with Dylan.

More summaries and resources for teaching or studying Pulse.