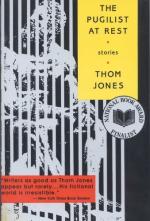 The Pugilist at Rest Characters

Thom Jones
This Study Guide consists of approximately 26 pages of chapter summaries, quotes, character analysis, themes, and more - everything you need to sharpen your knowledge of The Pugilist at Rest.

Lance Corporal Hanes is an experienced Marine with two Purple Hearts who has only twelve days left on his tour of duty in Vietnam. He is killed when the platoon comes under fire from the North Vietnamese. The narrator is angry that Hanes, since he had such a short time left, was not sent to the rear, out of harm's way.

Hey Baby is the nickname of one of the Marine recruits at boot camp. He is large and fairly tough, but he is a bully and is not liked by the other recruits. He takes to picking on Jorgeson, the narrator's buddy. But when he shoves Jorgeson hard with his rifle, the narrator responds by striking him in the temple with the butt of his rifle. Hey Baby suffers a fractured skull.

Jorgeson is a friend of the narrator since they were...

More summaries and resources for teaching or studying The Pugilist at Rest.

The Pugilist at Rest from BookRags. (c)2022 BookRags, Inc. All rights reserved.