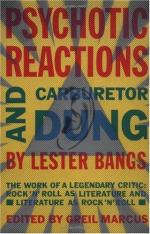 Lester Bangs
This Study Guide consists of approximately 31 pages of chapter summaries, quotes, character analysis, themes, and more - everything you need to sharpen your knowledge of Psychotic Reactions and Carburetor Dung.

This detailed literature summary also contains Topics for Discussion and a Free Quiz on Psychotic Reactions and Carburetor Dung by Lester Bangs.

This book is a collection of essays by the renowned rock critic Lester Bangs that spans almost his entire career from 1970 right up to his death in 1982. These essays are primarily rock criticism, but they are not strictly limited to that. Bangs eschews the traditional method of criticism where the critic is a passive observer and interjects many personal details into the text.

Throughout the book it becomes clear that Bangs believes rock and roll should be about passionate emotion instead of musical virtuosity. When Bangs is still in his teens he finds this sort of simplistic but emotional rock in bands like Question Mark, the Mysterians, and the Count Five. Somewhat later, Bangs embraces the Velvet Underground and Iggy Pop and the Stooges. Bangs makes the Velvet Underground's lead singer Lou Reed his personal hero. By the end of Bangs' career, he is mostly devoted to punk bands like Richard Hell and the Voidoids, the Ramones, and the Clash. In most cases, the members of these bands were not incredibly talented musicians, but Bangs finds something more authentic in them than the more stylized bands such as Led Zeppelin that dominated the 1970s.

A whole section of the book is devoted to Lou Reed and Bangs' conflicted relationship with him, and this remains a source of constant discussion up to the very end of the book. Bangs eventually decides that Reed is no longer his hero and has become a child with a drug problem. However, Bangs still admires much of the music Reed produces after this, going so far as to at least halfway seriously declare one of his albums that was widely considered unlistenable to be the greatest album ever made. Despite all their arguments, Bangs believes Reed never meant him any harm and did a huge favor to him by telling him the truth.

As much as this book is about music, it is also about Bangs himself. Bangs documents many of his exploits, sometimes within his rock criticism but sometimes in stand alone essays. Most of these stories involve the use of a great deal of alcohol and illicit drugs. Even more frequently, Bangs discusses his romantic and sexual frustrations. Bangs portrays himself as very unlucky in love. To Bangs the point of most of these stories is how a person deals with the pain of existence.

More summaries and resources for teaching or studying Psychotic Reactions and Carburetor Dung.