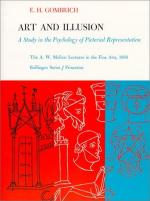 Compare & Contrast Art and Illusion: A Study in the Psychology of Pictorial Representation by Ernst Gombrich

Ernst Gombrich
This Study Guide consists of approximately 26 pages of chapter summaries, quotes, character analysis, themes, and more - everything you need to sharpen your knowledge of Art and Illusion.

1950s: Post-World War II Europe is still recovering from the uncertainties and devastation of the war years. The growth of the Soviet Union and ongoing hostilities between Eastern Bloc countries and NATO lead to the Cold War.

1990s: Although the Cold War ends with the breakup of the Soviet Union in the 1980s, fear and uncertainty continue to dominate the international political scene.

Growth of technology as well as the "miracles" of science lead to a general belief in the application of the scientific method to all fields of endeavor, including art criticism and history.

1990s: While technology continues to grow at unprecedented rates, there is evidence of some distrust of science, most notable in the critiques of science offered by scholars such as Bruno Latour.

More summaries and resources for teaching or studying Art and Illusion: A Study in the Psychology of Pictorial Representation.

Art and Illusion: A Study in the Psychology of Pictorial Representation from Gale. ©2005-2006 Thomson Gale, a part of the Thomson Corporation. All rights reserved.