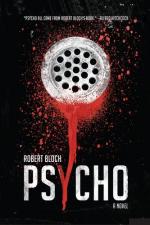 Robert Bloch
This Study Guide consists of approximately 38 pages of chapter summaries, quotes, character analysis, themes, and more - everything you need to sharpen your knowledge of Psycho.

Psycho is the horror story of Norman Bates, his strange relationship with his mother, and the motel he runs on the side of a deserted highway.

The novel opens with an image of forty-year-old Norman Bates reading in his office. His mother approaches and chides him for reading filthy material. The two get into a vicious fight as Mother lambastes Norman and he is too weak, too afraid to stand up to her. She challenges everything about Norman, from his social skills to his sexual predilections while he silently takes the abuse. In his head, however, he imagines the release he would feel if he killed his mother, but the buzzer ringing at the front door breaks him from his thoughts. Someone needs a room in the motel.

The woman who needs a room, Mary Crane, has just driven across several states in the pouring rain. Norman doesn't know that Mary Crane has just stolen $40,000 from her real estate boss. She hopes to meet Sam Loomis, her fiancé with whom she's been having a long distance relationship, settle his debts, and start married life together. After getting lost on the highway, Mary pulls into the Bates Motel and asks for a room. Norman, who has clearly never interacted with young women, shyly asks Mary up to the house for dinner. She accepts, and when she hears of the horrific, and seemingly abusive, relationship Norman has with Mother, gently suggests that Norman put his Mother in an institution. This idea outrages Norman, who shouts and screams that Mother is normal: "She's not crazy!" Mary quietly excuses herself, returns to her motel room, and vows to return the money she's stolen so that she doesn't end up tortured by guilt. Moments later, an old woman enters Mary's room while she's in the shower and beheads her.

In the moments before Mary was murdered, Norman had been watching her undress through a peephole in his office. He was drinking at the time, and passed out in his chair. He awoke to find Mary's corpse and immediately suspected Mother to be the murderer. He momentarily considers letting Mother go to prison, but the thought of being separated from her is too much. He knows he must protect her, help cover up her crimes. Norman methodically cleans up the murder scene, just as he remembers cleaning up the scene with Mother and "Uncle Joe" all those years ago. He deposits Mary's corpse and car into the sinkhole behind the motel and assumes he has just gotten away with murder. Meanwhile, Mary's old boss, Mr. Lowery, has hired a private detective to search Mary out and return the $40,000 to him. That detective, Mr. Aborgast, has traced Mary to the motel and now stands knocking at the door, demanding to speak with Norman, and with Mother. Moments later, the same mysterious figure, who appears to be an old woman, attacks Aborgast and slits his throat. Norman deposits Aborgast's body and car in the same sinkhole.

Unfortunately for Norman, Mary Crane's little sister has grown suspicious of her sister's disappearance and meets up with Sam Loomis to search for her. They too trace Mary back to the Bates Motel, and Lila, Mary's sister, is convinced that something terrible has happened to Mary here. She notifies the local sheriff, but he insists that she is wrong. Norman Bates is harmless, and his mother has been dead for years (after poisoning herself and her lover, "Uncle Joe"). Unconvinced, Lila arranges for Sam to distract Norman while she explores the house searching for clues. Although Sam does his best to distract Norman, he drops his guard and Norman smashes a whisky bottle over Sam's head, knocking him unconscious. Meanwhile, as Lila explores the house, she finds a tiny shriveled woman whom she assumes is Mrs. Bates. As she approaches, she discovers that the woman is actually a taxidermal corpse. Norman appears behind Lila, dressed in his mother's clothes and speaking in a high, affected voice saying, "I am Norma Bates" (Page 190). He raises a butcher knife and lunges at Lila, but Sam, who has woken from his stupor, manages to wrestle Norman away from her and hold him there until he can be arrested. In the weeks that follow, it is discovered that Norman murdered his mother and her lover, "Uncle Joe." To mask the guilt he felt over the murders, Norman developed a split personality in which Mother became his alternate self. At trial, Norman is found to be insane and is institutionalized for life.

More summaries and resources for teaching or studying Psycho.