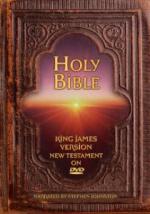 Dahood, Mitchell, Psalms I: 1-50, Garden City, NY: 1956. This is Volume 16 of the thirty-eight volume Anchor Bible commentary set. In this book Psalm 8 is accompanied by four pages of notes that refer to previous translations, cross-references, and related literature.

Fosdick, Harry Emerson, A Guide to Understanding the Bible: The Development of Ideas Within the Old and New Testament, New York: Harper Torchbooks, 1956.

Frye, one of the most respected literary critics of modern times, examines the Bible, not as literature, but as a historically significant document that uses many literary techniques.

Gabel, John B., and Charles B. Wheeler, The Bible as Literature: An Introduction, New York:Oxford...