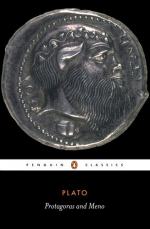 Plato
This Study Guide consists of approximately 32 pages of chapter summaries, quotes, character analysis, themes, and more - everything you need to sharpen your knowledge of Protagoras and Meno.

This detailed literature summary also contains Topics for Discussion and a Free Quiz on Protagoras and Meno by Plato.

Socrates is brought to see Protagoras, who is known as an old and successful Sophist. Hippocrates says that he wants to study with Protagoras, not to become a Sophist, but as part of his liberal arts study program. Protagoras admits he is a Sophist unlike some other men, but what is a Sophist supposed to teach? Socrates enters into a conversation with Protagoras the Sophist on what to teach. Protagoras answers that everyone can learn virtue, as a citizen and leader, and that is what he teaches best. Socrates then asks about what is virtue, which he considers to be one thing. Protagoras has broken up virtue into five different parts and compares them to the cooperating parts of a face. Socrates objects to this and shows that the so-called different parts of virtue, such as knowledge and holiness, are related. This angers Protagoras, who goes into one of his trademarked, long-winded speeches.

At this point, Socrates prepares to leave the premises, but is stopped by the men listening to the conversation. Socrates agrees to stay, with the provision that Protagoras will make statements and ask questions, and Socrates will show how to answer such questions in a short and to the point manner. Protagoras asks questions on the lines of a poem by Simonides. This conversation degenerates into a hair-splitting debate on the meaning of various words. At this point, Protagoras relents and agrees that asking questions about a poem is not the best way to have a dialogue, since the poet is not available to interpret his poem. Socrates goes back to asking questions of Protagoras. Protagoras admits that four of the virtues, knowledge, justice, holiness and temperance, are closely related, but one of the virtues, courage, is separate from the others. There proceeds to be a long series of questions on whether courage is an independent quality or is it also dependent on a person's knowledge of the situation. If a person has knowledge of a situation, this will help him or her decide whether or not to force themselves to have courage too. This leads to an inquiry over what is the role of knowledge in a person's life. Many people say that knowledge is a secondary part of a person's life, and the person is moved to action by seeking pleasure and avoiding pain. Socrates' answer to this idea is that man must have the ability through knowledge to determine what his long-term advantage is, since many times a short-term pain lives to a long-term good result. Likewise a short-term pleasure can lead to a long-term pain or even a personal disaster. Since knowledge is a key requirement for a person to have virtue, then virtue, or knowledge of virtue can be taught. Socrates comments that now he and Protagoras are in the funny situation of Socrates saying that virtue can be taught, and Protagoras saying that it cannot. This is the opposite of the situation at the beginning of the dialogue.

The Meno dialogue begins with Meno asking Socrates if virtue can be taught. Meno asks Socrates if virtue can be taught. Socrates says he has no idea of what is virtue and if he does not know what it is, he cannot teach it. Socrates then asks Meno, what he thinks is virtue, and to not just repeat Gorgias' thoughts, Meno's teacher. Meno tries to describe virtue, but describes what is the good thing to do for, a leader, a woman, a child and a slave to do, without describing an overall concept of virtue, or the good. Meno becomes thoroughly confused by Socrates. Socrates then tells the story that all souls are immortal and they are reborn countless time. During these times, the souls learn everything there is. The trick of learning, therefore, is to get someone to recall what they already know. Socrates tries this out by getting a slave boy to recall geometry. However, the problem still is where are the teachers of virtue? The dialogue is interrupted by an appearance by Anytus, who warns that Socrates will pay for his outspokenness.

More summaries and resources for teaching or studying Protagoras and Meno.